It seems the Boston Red Sox have enjoyed their time playing the Baltimore Orioles this weekend.

Boston secured the series win of its four-game set against Baltimore on Sunday with a 4-3 victory at Camden Yards in Game 3.

And it was the Rafael Devers show.

Three of the Sox’s four runs came off the bat of the star third baseman, who hit a solo shot and a two-RBI double in the victory, which was Boston’s fourth straight.

Nick Pivetta delivered a sharp enough outing on the mound, surrendering just two runs across six innings before turning it over to the bullpen.

GAME IN A WORD
Raffy.

Devers was the star of the show Sunday.

ON THE BUMP
— Pivetta was once again pretty steady for the Red Sox, giving them a chance to win. The 28-year-old allowed two runs on three hits over six innings, striking out a pair while walking three.

His first bit of trouble came in the opening inning. After getting the first two hitters out, it looked like he was going to cruise. Instead, he walked the next two batters before giving up a single to Ryan Mountcastle that drove in Trey Mancini, making it 1-0 Orioles.

Pivetta danced out of any further damage in the first, then really dialed in for the ensuing innings. He pitched 1-2-3 frames in the second and third, then got the first two batters of the fourth out before allowing a Freddy Galvis single. He responded well, though, and stranded Galvis.

The righty paid for a mistake in the fifth, however. With two down and the bases clear, Pivetta left a cutter (or maybe it was a changeup?) over the plate for Cedric Mullins, who clubbed it to right-center field for a homer that put the hosts up 2-1.

Pivetta got through the rest of the fifth, as well as the sixth, without issue to finish his afternoon.

— Josh Taylor got the seventh, and though he struggled with command and walked two, he managed to pitch a scoreless inning, keeping Boston’s 3-2 lead intact.

— Adam Ottavino took over in the eighth, and allowed he stumbled a bit.

Behind 3-1 to leadoff hitter Austin Hays, a slider got away from Ottavino and hit Hays. The righty got the next two hitters to ground out, allowing Hays to move to third and eventually score when Mountcastle lined a two-out double to left-center.

The Mountcastle two-bagger cut Boston’s lead to 4-3, and though he would reach third, he was stranded there, as Ottavino induced a Galvis groundout to end the inning.

— Matt Barnes came in for the ninth and closed the door with a 1-2-3 inning for his eighth save of the season.

IN THE BATTER’S BOX
— The Red Sox didn’t have too much trouble making contact against O’s starter Dean Kremer, but it wasn’t until they got into Baltimore’s bullpen that they really broke through.

— In the second inning, Kremer put a 1-0 curveball on the edge of the plate to Devers. Somehow, Devers made contact off the end of the bat and poked it into center field for a solo shot that tied the game at one apiece.

— Most of the game, the Red Sox offense seemed like it was about to break through. In the sixth inning, they did, thanks, of course, to Devers.

Marwin Gonzalez and Alex Verdugo began the inning with singles, which prompted Brandon Hyde to replace Kremer with Adam Plutko.

J.D. Martinez walked to load the bases with no outs, and after getting Xander Bogaerts to strike out, Plutko made the mistake of leaving a fastball up in the zone for Devers. The third baseman connected on the 2-2 heater, roping it to the wall in right-center field, driving in Gonzalez and Verdugo to turn a 2-1 deficit into a 3-2 lead for Boston.

Both runs ended up getting charged to Kremer.

That was as much as the Red Sox would score in the stanza, as Plutko got Hunter Renfroe and Bobby Dalbec both to ground out, ending the inning while leaving runners on second and third.

— The Red Sox loaded the bases in the seventh with two outs, but were unable to cash in.

— Up 3-2 in the eighth inning, Renfroe provided the Sox with some insurance. He launched a solo homer — which sounded beautiful off the bat — into dead center with a beautiful swing.

— Devers had a pair of hits, while Verdugo, Renfroe and Dalbec each had one.

UP NEXT
The Red Sox and Orioles will finish their four-game set Monday night. First pitch from Camden Yards is set for 7:05 p.m. ET, with pregame coverage beginning on NESN at 6 p.m. Martín Pérez will get the ball for the Red Sox, with Jorge López opposing him. 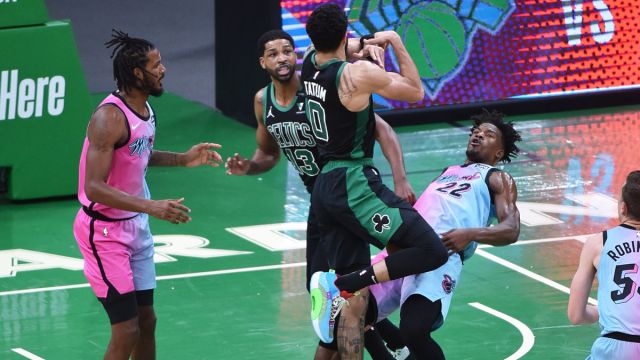 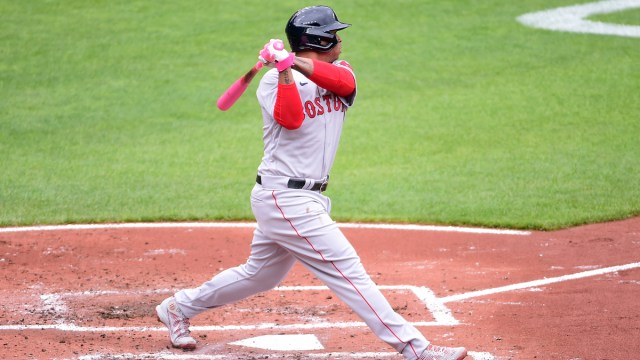