The New York Islanders evened their second-round Stanley Cup playoff series against the Boston Bruins with a 4-1 win Saturday night.

Here are some takeaways, thoughts and analysis from Game 4:

— The Bruins probably are relieved to be headed home where they have had far more offensive success. Boston scored just three goals in 123:36 of game time on Long Island, and one of those goals — Brad Marchand’s Game 3 winner — came from a near-impossible angle. Credit to Marchand for the intuition and being able to pick the corner, but that goal wasn’t the product of beautiful offense.

Nine of the Bruins’ 29 shots came from defensemen Saturday night with no real good looks. Boston mustered just nine high-danger chances (per Natural Stat Trick), and five of those came in the first period. They didn’t have a single shot on goal in the final 6:18.

When Boston was able to solve the Islanders’ forecheck, it struggled to get good chances, especially as the game progressed. The result was a lot of shot attempts from the perimeter.

Returning home won’t benefit the Bruins solely because of home cooking and sleeping in their own beds. The chess match is in full effect between Cassidy and Barry Trotz. For example, we touched on this in the notes column for Game 4, but Patrice Bergeron was getting worked in the faceoff circle against Jean-Gabriel Pageau. With the series back in Boston, Cassidy can avoid that matchup. More faceoff wins — Bergeron won 54 percent of his draws in Boston — leads to more possession and the ability to set up plays in the offensive zone.

It’s also possible Cassidy decides to make a lineup tweak. Perhaps Karson Kuhlman? His speed, especially through the neutral zone, would give the Islanders a different look. It’s something to consider, but then again, Cassidy felt confident enough to roll out his fourth line with just a few minutes left and chasing a goal Saturday night, so it’s a hard read at the moment.

— The Islanders’ two goals were, in part, the product of defensive breakdowns for the Bruins. On the first, defenseman Jeremy Lauzon got sucked in behind the net, while Matt Grzelcyk went with Mathew Barzal who carried the puck below the goal line. That left Kyle Palmieri relatively unchecked in front of the net.

Both D-men below the goal line — not great.

The second breakdown came on Barzal’s game-winner when the Bruins got caught running around the defensive zone, allowing him to find a wide-open patch of ice.

“Their two five-on-five goals, we had major D-zone breakdowns,” Bruins coach Bruce Cassidy explained. “The (first) one with the D behind the net, and the other one, on the wall, the winger dives down on Barzal. That’s basic coverage that he has to hold his position until the center arrives. So it’s disappointing we weren’t able to get those areas done.”

— It’s actually getting kind of comical to see the weird, unpredictable routes in which pucks take before finding the back of Tuukka Rask’s net. After a majority of the Capitals’ goals in the first round were off deflections or redirections, Rask’s luck has been iffy at best in this series, too. Barzal made a brilliant play to bat the game-winner out of the air, but Rask was screened and never saw the puck. When he sees it, he typically makes the save, as he did on Anthony Beavuillier’s point-blank backhand attempt in the first and then another on Josh Bailey’s one-time attempt from Brock Nelson.

— The turning point in Game 4 was obvious. The Bruins, after scoring on the power play to take a 1-0 lead, had a golden chance to put the game, and perhaps the series, away. Trotz and the Islanders decided to challenge the goal for goalie interference, but replay upheld the goal and left New York shorthanded once again for the failed challenge.

Kyle Palmieri then tied the game 41 seconds after the New York kill.

— It was an uncharacteristically rough night for Charlie McAvoy, at least on the stat sheet. McAvoy took an unsightly minus-3 in just over 24 minutes of ice time. He also picked up a high-sticking penalty late in the second period. It appears the Islanders are going out of their way to hit the young D-man, and it appeared to take its toll late in the game as he struggled at times to move the puck out of his own zone. He’s a pretty safe bounce-back candidate, though. 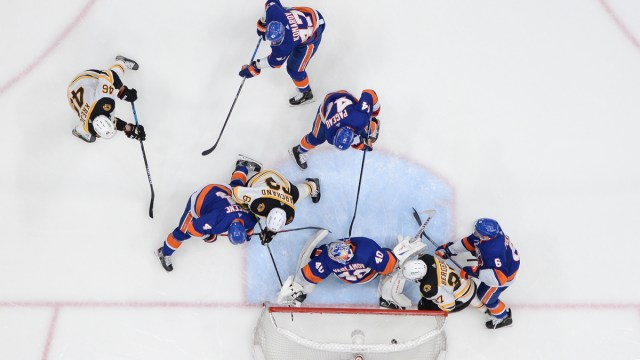 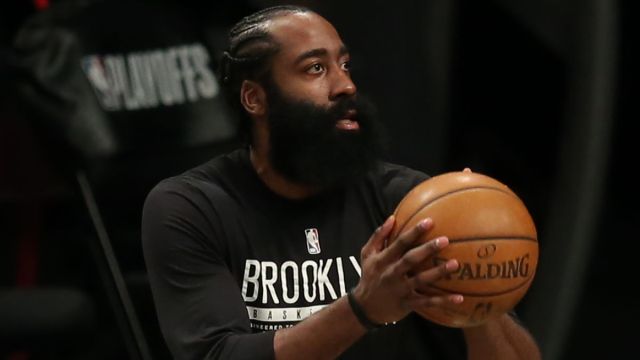