It’s getting easier to envision Kemba Walker leaving the Celtics this offseason.

Boston reportedly tried to move the star guard last offseason, and trade chatter has resumed since the conclusion of one of the more disappointing Celtics seasons in recent memory. The most in-depth reporting arrived Wednesday, with Bleacher Report’s Farbod Esnaashari revealing that Walker and the Celtics both want a divorce this summer.

Here are some of the more noteworthy excerpts from Esnaashari’s piece:

Sources said the Boston Celtics and Walker are likely to move forward from their relationship this offseason in a mutual agreement between the parties.

Sources close to the Celtics revealed Ainge sought to trade Walker, and Jrue Holiday was the target. Holiday ended up with the Milwaukee Bucks, who are now in the second round of the playoffs.

A source close to Walker said he was hurt by Boston’s efforts to trade him, which created a rift in the Walker-Ainge relationship. Walker has a great relationship with his teammates and looked forward to being a veteran mentor to Tatum and Brown, but the same can’t be said about Walker and the front office. He no longer feels wanted.

One executive in the NBA said Walker isn’t the only player to have those negative feelings toward Ainge, as players around the league have not trusted Celtics management during the Ainge era.

Obviously, Esnaashari isn’t an NBA reporter with cache similar to that of Adrian Wojnarowski or Shams Charania. So, his reporting should be taken with a grain of salt.

Trading Walker wouldn’t be easy for new general manager Brad Stevens. The 31-year-old is due $36 million next season and has dealt with knee issues since arriving in Boston two years ago.

Esnaashari identified the New York Knicks and Dallas Mavericks as teams that could make a Walker trade work. 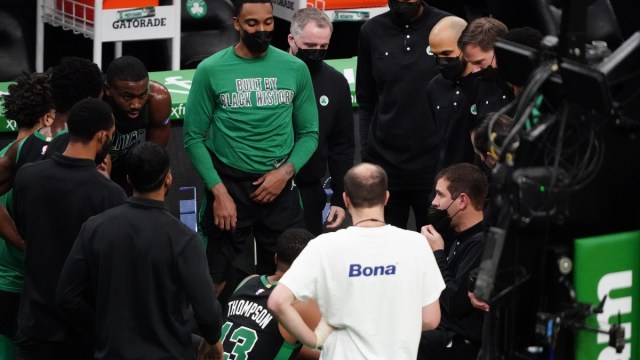