Boston Red Sox right-hander Garrett Richards has been transparent with how he’s had to adjust Major League Baseball’s new guidelines, but his performance Monday in a 6-5 win over the Kansas City Royals strayed far from the norm.

Richards was throwing pitches he never had thrown in a game before.

The 33-year-old, who’s played 10 seasons in the big leagues, admitted the slow curveball he started with in the second inning — it measured just 63 miles per hour in the third — marked the first time he’s ever thrown that pitch. Richards was throwing what he referred to as a “split changeup,” too. He learned that pitch four days ago.

“I’m figuring it out. I’m starting to throw a changeup now that I learned this week in about three days. Now I’m throwing a curveball at 60 miles an hour, which is new for me. Just trying to figure out how to pitch again, man,” Richards said on a postgame video conference.

“I’ve never had to make this kind of change in my whole career so I’m just trying to make the best of it and give us a chance to win.”

Richards put together two innings he most certainly will want to forget Monday. He allowed five runs on three homers in the first two innings as Kansas City took a 5-1 lead into the bottom of the second.

Richards did, however, put together an in-game bounce back. He pitched into the sixth, which was somewhat shocking given how the first two innings went, and didn’t allow a run over his final 3 2/3. Richards concluded after allowing five runs on 11 hits with three strikeouts.

“I developed a little more of a feel as the game went on,” Richards said. “Just going out there and competing, trying to give us the best chance to win, not quitting and just grinding. That’s all I’ve been doing.”

Richards even was shown on the NESN broadcast dunking his arm in an ice bucket between innings. That usually is something pitchers don’t do until after the game, not so much during the early innings of a start. He explained he was trying to do so to limit him from sweating.

“Just trying to work around the new rules and stuff that we have right now (and) trying to figure out different ways for me to be successful,” Richards said. “That’s what was asked of us to do so that’s what I’m trying to do.”

Red Sox manager Alex Cora complimented Richards for continuing to compete despite the fact he didn’t have his best stuff. Ultimately, it helped the Red Sox save their bullpen while the offense mounted a comeback. It was the 26th time this season Boston has recorded a comeback win, the most in the league. 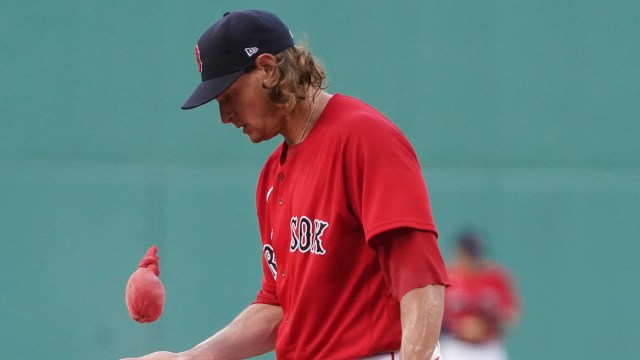 Alex Cora Compliments Garrett Richards For Competing On Down Night