At this point in his career, Brian Hoyer’s greatest asset is his deep knowledge of the New England Patriots’ playbook and offense.

But the veteran quarterback doesn’t view himself as a de facto coach who happens to wear a helmet and occupy a spot on the 90-man roster.

Speaking Monday for the first time since he re-signed with the Patriots last month, Hoyer noted multiple times that he’s part of the team’s quarterback competition, not a QB coach.

“I think I have a responsibility to the quarterback room and the team in general,” Hoyer said when asked whether he feels a responsibility to help first-round draft pick Mac Jones acclimate to the NFL. “Obviously, I’m the most experienced of the group in this offense and on this team, so to impart that knowledge is obviously a big part of my role here, but also to go out and compete and push those guys every day.

“So it’s been fun, obviously, to get back with Cam (Newton) and Stid (Jarrett Stidham) and then bring Mac along and get to know him. He’s a great kid, and he’s working really hard.”

The Patriots re-signed Hoyer after they drafted Jones. The 35-year-old journeyman’s wealth of experience in New England — far more than Newton or Stidham possesses — makes him an ideal early-career mentor for the highly touted Alabama product.

Hoyer said he’s been happy to answer Jones’ questions and share advice when asked, but he isn’t approaching the rookie with unsolicited tips.

“I mean, I’m not the quarterback coach, so that’s not really my responsibility,” Hoyer said. “I think if anything, I notice him coming and asking me a lot of questions for me to give my feedback. I remember doing the same thing with Stidham, what was that, three years ago now. Or Danny Etling the year before that.

“I mean, for me, whether it’s Mac, Jarrett, Cam — Cam asked me a question today about something — that’s my responsibility, being the most experienced quarterback in that room, is to kind of share that wealth of knowledge and then go from there.”

Hoyer called Jones “a smart kid” who “asks a lot of questions.”

“You can tell he’s working hard,” he said.

The Patriots have yet to name a new quarterbacks coach since Jedd Fisch left in December to take over as head coach at the University of Arizona. Hoyer said staff newcomer Bo Hardegree, who worked under Adam Gase in Denver, Chicago, Miami and New York, has been assisting offensive coordinator Josh McDaniels with those duties this spring.

New England’s QB competition will be fascinating to watch in training camp. Teams rarely carry four quarterbacks on their 53-man roster, which means one of Hoyer, Stidham or Newton likely will be out at the end of the summer. Jones is a roster lock as a first-round pick.

Newton is the least likely of those three to be cut, as he currently sits atop the Patriots’ QB depth chart and has consistently led off drills in spring practice when healthy. Stidham, who has yet to make his first regular-season NFL start, has looked good in organized team activities and minicamp. Hoyer delivered a number of impressive deep balls in last Thursday’s open OTA, but he attempted just six passes in competitive team drills on Day 1 of mandatory minicamp, far fewer than his counterparts.

Newton started 15 games for the Patriots last season. Hoyer started the other — in Week 4 while Newton was sidelined following a positive COVID-19 test — but struggled, was demoted to third string and did not dress for New England’s final 12 contests. 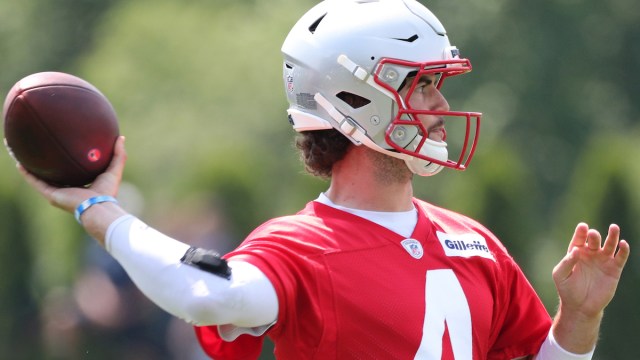 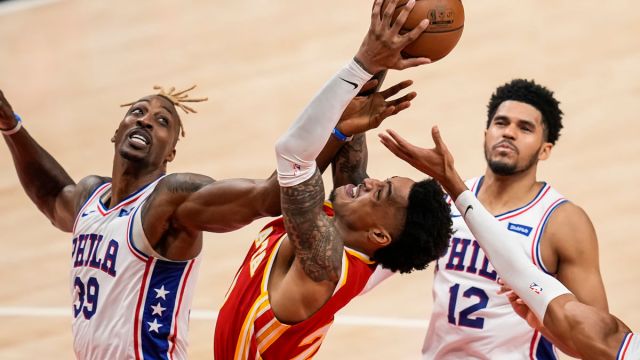