As the Patriots progress through Phase 3 of their offseason program, we’re taking a position-by-position look at New England’s new-look roster. First up: tight ends.

Smith and Henry were the top two available free agents at their position, and their contracts include identical average annual values of $12.5 million, making them the third-highest-paid tight ends in the league behind George Kittle ($15 million AAV) and Travis Kelce ($14.3 million AAV).

New England also shipped Ryan Izzo, their TE1 by default last year, to the Houston Texans and got veteran Matt LaCosse back from his COVID-19 opt-out. 2020 third-round draft picks Devin Asiasi and Dalton Keene both return after underwhelming rookie campaigns.

Most recently, the Patriots signed third-year pro Troy Fumagalli and cut fullback Danny Vitale in a corresponding move. Fumagalli caught 14 passes for 118 yards and two touchdowns over two seasons with the Denver Broncos.

THREE BIG QUESTIONS
1. How will Henry and Smith fit in? In 2020, the Patriots ran a grand total of 22 offensive snaps out of 12 personnel (one running back, two tight ends). No other team ran fewer than 91. More than half the league ran 200-plus. Expect New England’s number to skyrocket this season, with their big-ticket newcomers both projecting as starters.

It remains to be seen exactly how Henry and Smith will be deployed together, but both have the versatility to play in-line, in the slot or out wide. Smith — one of the NFL’s best at generating yards after the catch — even took handoffs out of the backfield with Tennessee.

Henry (60 catches, 613 yards, four touchdowns last season) was present last Thursday at the Patriots’ first open organized team activities practice. Smith (41-448-8) was part of a large group of veterans who did not attend.

“This time of the year is great for the team,” Henry said in a post-practice video conference. “We get to build team chemistry at a slower pace sometimes early on, and then we get to continue to build. It’s a great time before training camp comes to just get a lot of reps in that maybe we can’t get back. I enjoy being here. It’s fun to be around the guys and to build this team chemistry as we go into the season.”

2. Is there hope for Asiasi and Keene? It’s unwise to write off young tight ends after one season. Why? Because it’s proven to be one of the most difficult positions for NFL rookies to master, even in seasons that aren’t significantly altered by a global pandemic.

That said, Asiasi and Keene were among the least productive rookie tight ends of the last decade — they combined for five catches, 55 yards and one touchdown, and neither played in more than nine games — and the Henry/Smith signings suggest the Patriots aren’t confident either will ever become a starting-caliber player.

3. Can this group return to its Gronk-era heights? Here’s where the Patriots have ranked in tight end production in the two seasons since Rob Gronkowski’s departure:

Thirty-one NFL tight ends have caught more passes than the Patriots’ entire position group over the last two seasons, including Henry (115) and Smith (76). A whopping 50 had more catches than the Izzo-Asiasi-Keene trio in 2020.

The presence of Henry and Smith should immediately turn one of New England’s biggest weaknesses into a strength. The Patriots’ offense cannot properly operate without a legitimate pass-catching threat at tight end, and they’ll now be able to deploy two top-tier options simultaneously.

If both play to their potential, Henry and Smith have a chance to be the Patriots’ best tight end duo since the days of Gronkowski and Aaron Hernandez in the early 2010s.

MOST TO PROVE
Asiasi and Keene.

Neither provided much reason for optimism last season, but they’ll now have the benefit of a full offseason program, full training camp and full preseason, plus a year’s worth of experience in the Patriots’ system. They have clear paths to roster spots as recent Day 2 picks, but both will need to show improvement in order to stick around in New England’s new-look tight end room.

Bill Belichick has shown a willingness to quickly jettison disappointing early-rounders, trading Duke Dawson (second round, 2018) and cutting Antonio Garcia (third round, 2017) after just one season.

The 28-year-old LaCosse also will need to fight to reclaim his roster spot after opting out of last season.

SLEEPER TO WATCH
Of the two rising NFL sophomores in this group, Keene’s versatility makes him the more intriguing player given New England’s current roster construction. The Patriots might opt not to carry a traditional fullback this season — they rarely utilized one during their Gronk-Hernandez heyday — and Keene, who played H-back at Virginia Tech, could handle some of those lead-blocking responsibilities. Jakob Johnson is the only fullback on the Patriots’ 90-man roster following Vitale’s release.

Keene will need to stay healthy, though. A mix of injuries and healthy scratches limited him to six appearances and 147 total snaps last season. 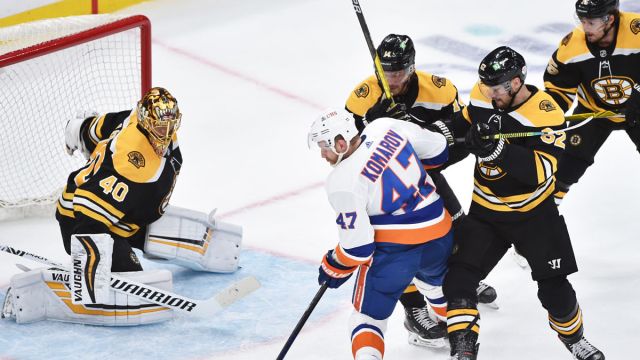