The Red Sox, as they usual do, are hitting. Even last season, Boston had an above average offense. And this year, the Red Sox are third in baseball in runs, second in hits and fifth in OPS.

But Alex Cora’s offense has been far from perfect. The Red Sox are middle of the road in on-base percentage and are on the wrong side of the league average in strikeouts. They have the fewest walks in the game.

So, there’s been room for improvement. And, well, Thursday was the kind of offensive showing the Red Sox have been looking for.

Boston earned a 12-8 win over the Houston Astros at Fenway Park in game that had just about everything. Yeah, there was a big home run and (more than) a few whacky plays, but the Red Sox put runs on the board thanks to a balanced, effective gameplan.

“I do believe, approach-wise, that was our best game of the season,” Red Sox manager Alex Cora told reporters after the game over Zoom.

The Red Sox were patient at the plate, walking four times compared to only three strikeouts. They racked up 14 hits and the bottom of the order combined to go 6-for-12, including a homer, with nine RBIs and a walk.

And the top of the order did its job, too, with J.D. Martinez mashing a home run and Xander Bogaerts and Rafael Devers both having multi-hit games.

— Much of the talk during and after the game was focused on the infield fly rule call in the bottom of the sixth inning. You can click here for a breakdown of what happened.

Fans on social media freaked out, but Cora was fine with the call.

— There was craziness in the top of the seventh, too. Boston turned a double play after Yuri Gurriel hit a weak ground ball that was ruled fair, unbeknownst to him and Yordan Alvarez, who wound up hanging around second base. Christian Vázquez threw to first base for the force out and Alvarez, clueless, later was tagged out.

“I never heard the umpire say foul ball, so I was continuing to get one out,” Vázquez said after the game during an interview with NESN’s Jahmai Webster. ” … Alvarez stepped out of the base and we got one there.”

— Speaking of Vázquez, he broke out of slump with three hits and three RBIs.

“Swing at good pitches, you know?” Vázquez said of his approach. ” … (Astros starter Zack) Greinke, he likes to nibble around the zone and I think it was a great game for me to swing at strikes today and (have) a great game hitting.”

— Despite the win, the Red Sox have lost five of seven games to the Astros this season. Both clubs currently qualify for the American League Wild Card spots.

“I feel like they’re about to take off as a team,” Cora said of the Astros. ” … They’re a complete team offensively, they’re very dangerous. But we do believe we can play with them.”

— As imperfect as the Red Sox lineup is, it’s hard to complain too much with stats like this:

— The American League East-leading Tampa Bay Rays did not play Thursday. Consequently, the Red Sox moved to within a game of first place in the division. 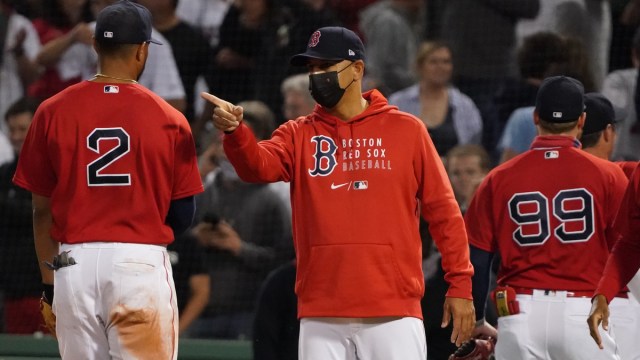 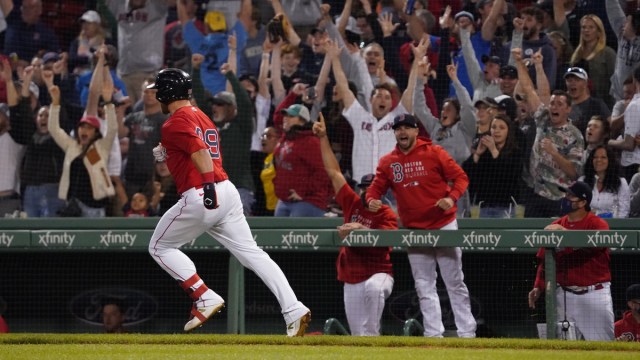