Mother Nature is not a fan of Tanner Houck.

The Boston Red Sox right-hander was supposed to get the start Wednesday against the Toronto Blue Jays, but he got bumped back a game when Tuesday’s game was postponed due to inclement weather. He finally took the bump on Thursday at Fenway Park against the New York Yankees, but his outing ended prematurely due to a 55-minute rain delay in the top of the fifth.

Down 3-1 with two outs in the bottom of the ninth, Kiké Hernández’s heroic double forced extras, and the Red Sox capitalized on an wild-pitch-filled performance from Brooks Kriske to come away with the 5-4 win in 10 innings.

But that was long after the tarp rolled up and Houck’s day was done. Josh Taylor came out to finish the top of the fifth, and Houck exited his first major league start since April 18 with an impressive line — he gave up two hits and fanned eight, walking two through 4 2/3 innings and 87 pitches. The Yankees’ lone run was unearned.

“I felt pretty good going into the game,” Houck said on a postgame video conference, noting he understood the decision to pull him after the rain delay. “Early on in the bullpen I kind of questioned my fastball command a little bit, but I knew right away the slider was feeling right on point. Part of it, you’re not gonna wake up every day and feel your best with everything, so went out there and competed with what I had and I’m pretty happy with it.”

His performance laid the foundation for a pretty hefty comparison:

His teammates — namely Alex Verdugo and Kiké Hernández — previously have compared him to the Red Sox ace.

And he’s in good company in another category, too. His 44 strikeouts through his first eight games are the third-most for a Red Sox pitcher, behind Daisuke Matsuzaka, Lynn McGlothen, Eduardo Rodriguez and Roger Clemens.

“Outstanding,” Red Sox manager Alex Cora said of Houck’s performance after the game. “The rain delay killed us right there, actually. We had to go to (Josh Taylor) early. But good stuff. He made some good pitches. Even when he was behind in the count, the 2-0 slider to (Brett) Gardner that he swung and missed and I think the ball hit him I guess, he made some good hitters look bad. The stuff — the fastball up, the sinker, the slider — were on point. He threw a few splitters. He was good, he was good.”

The Red Sox — and the Yankees, for that matter — had gotten a taste of the new and improved Houck on Saturday, when he tossed three scoreless innings of relief, striking out three and walking one to close out the 4-0 victory.

It made for quite the impressive lifetime stat line against his team’s biggest rival:

Prior to Thursday’s game, Cora praised Houck for fitting seamlessly into the two-sided role the organization envisioned for him when he was called up from Triple-A Worcester last week. With two impressive outings under his belt, it seems Houck is right where he belongs.

Here are some other notes from Thursday’s Red Sox-Yankees game:

? Even with the offense firing on all cylinders lately, there’s one player who hadn’t gotten involved: Xander Bogaerts. The shortstop hadn’t gotten a hit since Sunday, when he launched a double in the fifth inning in New York.

He finally got something going in the bottom of the sixth inning, when he singled up the right side. The hit snapped an 0-for-11 stretch at the plate for Bogaerts, who previously had struck out in the first inning then lined out with the bases loaded in the third.

? The home run magic has run out.

In their last two games against Toronto, the Red Sox hit a combined 11 home runs — six on Monday and five on Wednesday. That marked the fifth time in franchise history that the club hit five home runs in consecutive games.

And while it didn’t come on Thursday, the Red Sox previously have hit at least five home runs in three consecutive games — in a three-game sweep of the New York Yankees from June 17-19, 1977.

? Overall, it was a total departure from the powerhouse offense the Red Sox recently displayed, since Hernández’s game-saving double in the ninth was the only extra-base hit for either side.

? The Red Sox now have 30 come-from-behind wins this season, the most in MLB. While that’s not a position a team wants to find itself in, at least the Red Sox have shown they can battle back from tough spots. 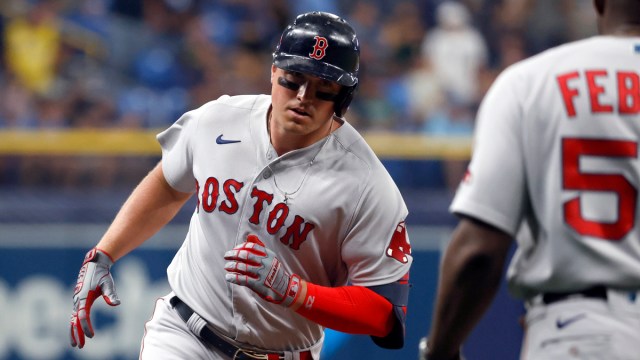 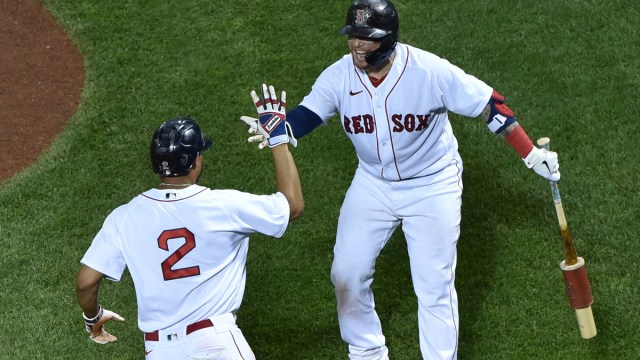