After his New England Patriots closed out the NFL preseason with a 22-20 win over the New York Giants, the head coach was asked whether he’d decided which quarterback will start against the Miami Dolphins in Week 1.

“No,” Belichick replied. “We still have a lot of decisions to make.”

Newton started all three of the Patriots’ preseason games, playing every rep with the first-team offensive line in the final two. Jones saw significantly more reps during the exhibition slate but worked mostly with backups. That snap distribution makes Newton the favorite to open the season as QB1.

After missing three practices this week following a COVID-19 protocol “misunderstanding,” Newton played the first two series Sunday night, completing 2 of 5 passes for 10 yards with an interception. Jones, the 15th overall pick in the 2021 NFL Draft, got the next six possessions, going 10-for-14 for 156 yards and a touchdown with two drops.

“I’m here to play any role that I can play and help any way I can,” Jones told reporters postgame when asked about his expectations for Week 1. “I’m going to be ready whenever my time comes. We’ve got work to do, we’ll get the things fixed, and then we’ll just keep rolling.”

Jones was asked whether he’s preparing like he could be the Week 1 starter.

“I learned at a young age (to) just prepare like the starter,” the 22-year-old said. “You don’t have to be the starter, but prepare, get in your routine. That’s something that Coach talked about today — ‘Hey, we’re going to be in this stadium again (when the Patriots visit the Jets in Week 2), just get in your routine.’ And that’s kind of what I did, just eat the same thing I eat every game day, kind of go about my business how I would. Then you kind of get into your routine, and that’s how you can get into the flow.”

Jones showed steady improvement over the course of his first NFL summer, upping his yards-per-attempt average by more than 3 yards in each of his three preseason games (4.6 to 7.6 to 11.1) while completing at least 68 percent of his passes in all three.

“I’ve gotten a lot of opportunities to play,” Jones said, “and I can improve on everything that I want to improve on. So I think just learning from (Brian) Hoyer, Cam, Jarrett (Stidham) — anybody I can. Just listening to Josh (McDaniels) and his coaching. There’s a lot of work to do, but I think I’ve made progress. But honestly, the only thing that matters is today. Then tomorrow, I’ll focus on tomorrow. But I think the past is the past, and we’re kind of moving on to the new season here.”

Newton did not speak with reporters after Sunday’s game.

The Patriots must trim their roster from 80 players to 53 by 4 p.m. ET on Tuesday. They’ll then have a weekend off before welcoming the Dolphins to Gillette Stadium on Sunday, Sept. 12.

Red Sox Hope ‘Nothing Serious’ For Jonathan Araúz After Leaving Vs. Indians 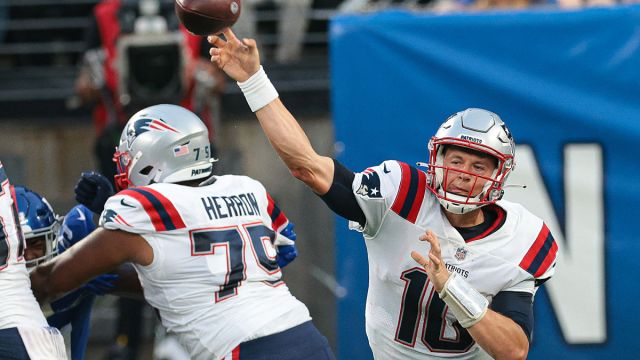