Will Dennis Schroder fill a glaring hole in the Boston Celtics’ roster?

The C’s are in talks with the free-agent point guard about a potential contract with Boston, Bleacher Report’s Jake Fischer reported Friday, citing NBA sources. Schroder remains on the open market, with teams officially allowed to sign free agents as of noon ET Friday.

“The Celtics are engaged in conversations to add free agent point guard Dennis Schroder, according to league sources,” Fischer wrote in a tweet. “Talks are still ongoing as Boston looks to address its need at point guard.”

The Lakers wanted to re-sign him, but he rejected their offer of a four-year, $84 million extension midway through last season. The New York Times’ Marc Stein reported last month Schroder seeks a contract worth more than $100 million.

The Celtics could use help at point guard. Marcus Smart presumably has the inside track on the starting job, with second-year guard Payton Pritchard and newcomer Kris Dunn also in the mix. However, plenty of NBA observers reckon the Celtics need better options at the position.

Boston likely would have to make further roster moves to add the contract Schroder reportedly desires to its ledger without going too far over the luxury tax. For now, fans can add his name to the list of rumored signing and wait and see how things play out. 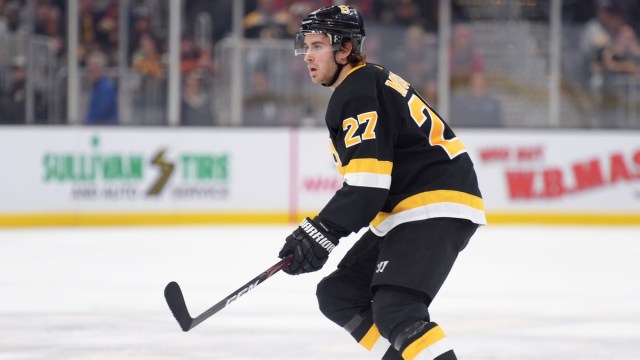 An Update On John Moore; How Bruins See D-Man Fitting In This Season

How Patrice Bergeron, Bruins Are Approaching His Pending Free Agency