FOXBORO, Mass. — The Patriots’ quarterback competition passed an important milestone Thursday night, with Cam Newton and Mac Jones both getting a chance to showcase their talents in New England’s preseason opener.

Newton played the first two series of the Patriots’ exhibition matchup with the Washington Football Team at Gillette Stadium before giving way to Jones, who played into the fourth quarter.

Here’s a quick snapshot of each QB’s performance:

CAM NEWTON
Final stats: 4-for-7, 49 yards, one sack
Newton’s first drive was a three-and-out: an inside handoff to Damien Harris for 2 yards, an incompletion to tight end Jonnu Smith in the flat and a third-down sack. The incompletion was out of Smith’s reach. Newton had no chance on the sack, as star edge rusher Chase Young quickly overwhelmed left tackle Isaiah Wynn.

The second possession for Newton was longer and more productive, featuring completions of 11 (diving contested catch by Jakobi Meyers over the middle), 16 (catch-and-run by Smith on a crosser) and 17 yards (middle screen to James White). But after Smith was flagged for holding, wiping out a Harris carry to the 1-yard line, the drive died. Newton’s next throw was a checkdown to White that picked up 5 yards, and his final one was an off-the-mark screen pass that appeared to hit off White’s hands.

White explained after the game that the Patriots expected Young to rush on the play, and his decision not to threw off the offense’s timing.

Newton played a total of 12 snaps, including penalties. Both of his drives came with New England’s first-team offense and against Washington’s starting defense.

MAC JONES
Final stats: 13-for-19, 87 yards, sack
The Patriots gave Jones one drive with the starting offensive line. His first completion — a 7-yard dart to Kristian Wilkerson — moved the chains on third-and-5. Operating against mostly Washington second-teamers, Jones showed good anticipation and timing on that and a subsequent completion to Kendrick Boune that picked up 13 yards. Three plays later, he nearly hit Wilkerson for what would have been a 34-yard touchdown, but the well-placed pass slipped through the wideout’s hands.

“It was a great ball by Mac,” Wilkerson said. “I’ve just got to adjust better to it. I’ve got to do my part. So I just have to go watch the tape and see what I can do better. I could run the defender off better or make a better catch.”

After an incompletion to Bourne on third-and-7, the Patriots settled for a 50-yard Quinn Nordin field goal.

Jones relied on short passes during his second drive, checking down to J.J. Taylor for 11 yards and hitting Wilkerson on a shallow crosser for 7. Fullback Jakob Johnson had to lunge to haul in Jones’ flip to the flat on second-and-7, and Jones’ attempt to climb the pocket and scramble picked up just 1 yard on third-and-2.

Jones’ best series came just after halftime. Offensive coordinator Josh McDaniels upped the tempo, and the rookie responded well, opening the half with eight consecutive completions. Three of those went to Taylor, and four were hookups with Wilkerson, with none of the eight gaining more than eight yards. Jones’ completion streak broke when he was hit as he threw on third-and-4, leading to another Nordin field goal.

The final two drives for Jones were forgettable. The first was a three-and-out with three consecutive handoffs. The second opened with a false start by nearly every member of the Patriots offense, followed by a QB hit (incomplete to Wilkerson), a 9-yard sack and a deep ball to Gunner Olszewski that was just out of the receiver’s reach.

Playing mostly with and against backups, Jones showed moments of promise in his NFL debut but averaged just 4.6 yards per attempt. After five series, he ceded QB duties to third-stringer Brian Hoyer. 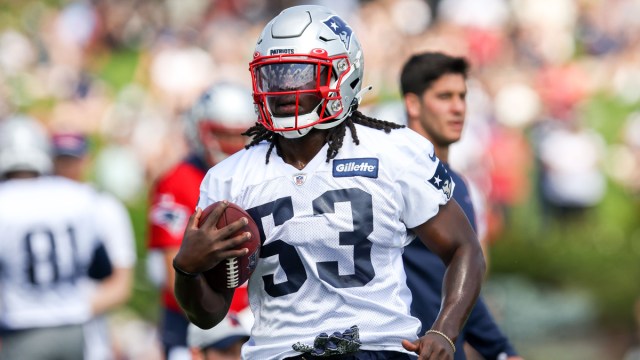 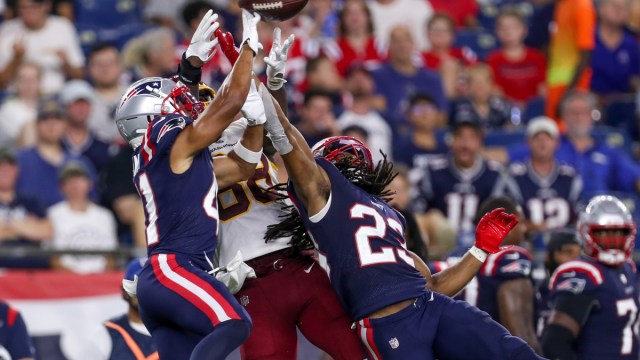