Nine Players To Watch In Patriots Preseason Matchup Vs. Eagles Skip to content

After sharing the field for two days of joint practices, the New England Patriots and Philadelphia Eagles will square off Thursday night in Week 2 of the NFL preseason.

Here are nine Patriots players to watch in that matchup:

QBs Cam Newton (No. 1) and Mac Jones (No. 10)
Last week against Washington, Newton played the first two offensive series (both with the starting offensive line) before giving way to Jones for the next five (one with the top O-line, four with reserves). Will that allotment change at all this week? Will Jones see any additional work with the starters — or get to face a first-team NFL defense for the first time in a game setting? Both starting QB candidates are coming off strong practice performances, as Tuesday’s joint session featured just three total incompletions between the two.

TE Devin Asiasi (No. 86)
Asiasi was the Patriots’ only available tight end in Tuesday’s practice, and that’ll likely be the case again Thursday night as position mates Hunter Henry (shoulder), Jonnu Smith (ankle) and Matt LaCosse (undisclosed) work their way back from injuries. This is a prime opportunity for the 2020 third-round draft pick to prove his worth after he managed just two receptions as a rookie. Expect him to see the heaviest workload of any Patriots skill player.

WR Nelson Agholor (No. 13)
Agholor’s oft-criticized hands had some issues with drops this week, but Monday’s practice was one of the best of his Patriots tenure to date, showcasing his potential as a dangerous deep threat. The former Eagle, who signed a two-year, $22 million contract with the Patriots this offseason, sat out New England’s preseason opener with an undisclosed injury and surely will be motivated to impress against his old team.

WR N’Keal Harry (No. 15)
Harry was targeted just once in 36 offensive snaps against Washington, finishing with one catch for 4 yards. He had some nice moments in 1-on-1s this week but was largely quiet in team drills, save for his late touchdown catch from Jones on Monday. That’s been the story for the 2019 first-rounder throughout training camp — flashy plays but questionable consistency. He could really use a productive outing against Philadelphia.

DT Christian Barmore (No. 70)
Barmore was a full participant in both joint practices, setting him up to make his NFL preseason debut Thursday night. The second-round rookie dressed but didn’t play last week, the result of a nagging foot injury that hindered him for much of training camp. Barmore, a North Philly native, has shown dominant potential when healthy and should have a sizable role in New England’s defense this season.

OLB Chase Winovich (No. 50)
The long-haired, high-energy edge rusher made his long-awaited training camp debut Sunday after a prolonged stint on the physically unable to perform list. He’ll now need to prove he deserves playing time in a loaded position group that features the likes of Matt Judon, Kyle Van Noy and Josh Uche. Winovich led the Patriots’ undermanned defense in both sacks and total pressures last season.

RB Rhamondre Stevenson (No. 38)
Stevenson’s first game as a Patriot was a smashing success, punctuated by a 91-yard touchdown that sent New England’s sideline into a frenzy. This week, the fourth-round pick began to see occasional reps with the first-team offense as New England employed a more liberal running back rotation. Stevenson’s blend of raw power and quick feet makes him an intriguing asset in the Patriots’ deep backfield.

CB Joejuan Williams (No. 33)
One of several recent draft picks who entered camp on the roster bubble, Williams led all Patriots defenders in snaps played in Week 1 of the preseason and could see even more action against Philadelphia. With Stephon Gilmore and Jonathan Jones both out of practice Tuesday, Williams stepped in as a starting outside corner opposite J.C. Jackson, with Jalen Mills — Gilmore’s top replacement this summer — shifting into the slot. Williams had an interception and a pass breakup against WFT but wasn’t going against starting-caliber wideouts and quarterbacks. He’ll face a more difficult challenge if he starts Thursday night. 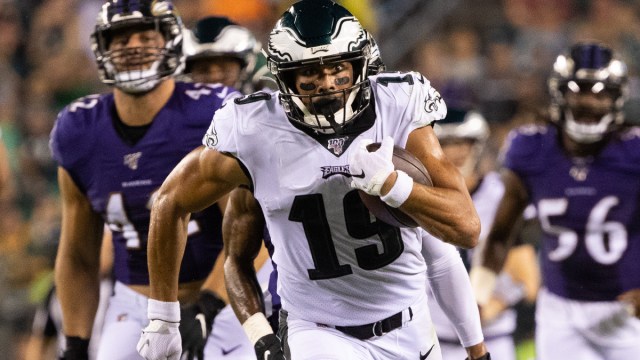 Patriots Mailbag: Which Eagles Players Could Wind Up In New England?