Judgment day is on the horizon for the New England Patriots.

The Patriots must finalize their initial 53-man roster by next Tuesday afternoon. They also must drop from 85 players to 80 by this Tuesday at 4 p.m. ET, one day before they welcome the New York Giants to Foxboro, Mass., for a set of joint practices.

Ahead of those cutdown deadlines, here’s a look at our latest 53-man roster projection:

Quarterbacks (2)
In: Cam Newton, Mac Jones
Out: Brian Hoyer
PUP: Jarrett Stidham
Newton has maintained his grip on the starting job to this point. Can he hold off the potential-laden Jones in the final week of the preseason? The Patriots ideally would keep Hoyer around on the practice squad. The veteran journeyman has been a valuable mentor for Jones.

Running backs (5)
In: Damien Harris, James White, Rhamondre Stevenson, Brandon Bolden, J.J. Taylor
Out: Sony Michel
New England could cut Taylor and attempt to sneak him onto the practice squad, but he’s played well this preseason and might not clear waivers. Michel, whom position coach Ivan Fears said has had “an awful good camp,” is one of the Patriots’ most valuable trade chips. In this scenario, they flip him for a mid-round draft pick.

Fullbacks (0)
In: None
Out: Jakob Johnson
The Patriots love their fullbacks, but during their two-tight end heyday in the early 2010s, they hardly used one. Johnson sticks around on the practice squad.

Wide receivers (4)
In: Nelson Agholor, Jakobi Meyers, Kendrick Bourne, Gunner Olszewski
Out: N’Keal Harry, Kristian Wilkerson, Isaiah Zuber, Tre Nixon, Devin Ross
In a way, the shoulder injury Harry suffered last Thursday against the Philadelphia Eagles might actually have improved his chances of making the initial 53, if only because it’ll be more difficult to trade him while he’s not healthy. With a reported recovery timetable of about four weeks, the Patriots could carry Harry through cutdown day, then place him on injured reserve, which would allow him to return in Week 4. But the 2019 first-rounder still fails to make the cut in this projection. We’re shifting Wilkerson off the roster, too. He flashed early in camp but has been plagued by drops of late. With two standout tight ends and a deep running back stable, the Patriots can afford to go lighter at wideout.

Defensive line (6)
In: Davon Godchaux, Lawrence Guy, Deatrich Wise, Henry Anderson, Christian Barmore, Carl Davis
Out: Montravius Adams, Akeem Spence, Bill Murray, Nick Thurman
PUP: Byron Cowart
Six D-linemen might be too many, but Davis has earned a roster spot with his play this summer. He’s been one of the surprise standouts of training camp. We’ve seen nice moments from Adams, Spence, Murray and Thurman, too, but the Patriots can’t keep everyone. This group is so much deeper than it was a year ago.

Cornerbacks (7)
In: Stephon Gilmore, J.C. Jackson, Jonathan Jones, Jalen Mills, Myles Bryant, Joejuan Williams, Justin Bethel
Out: Michael Jackson, Dee Virgin, D’Angelo Ross
No changes here, as Williams seems to have created some separation from Michael Jackson. Gilmore’s ongoing absence continues to loom over this group. He remains on the PUP list and has yet to practice this summer. Bryant and Jones also missed last week’s game with injuries.

Safeties (4)
In: Devin McCourty, Kyle Dugger, Adrian Phillips, Cody Davis
Out: Adrian Colbert, Malik Gant
NFI: Joshuah Bledsoe
Bryant’s injury is a bit of a wild card, as he plays a lot of safety, as well. If he’s going to miss significant time, the Patriots might opt to carry an extra defensive back. But there’s a sizable dropoff from these locked-in top four to Colbert and Gant.

Specialists (4)
In: K Nick Folk, P Jake Bailey, LS Joe Cardona, ST Matthew Slater
Out: K Quinn Nordin, LS Brian Khoury
Nordin’s erratic performance against the Eagles might have cost him a roster spot. We’ll see if the undrafted rookie can rebound this week — and if Folk can get back on the field. He hasn’t kicked in a practice or game since Aug. 4. It’s also unclear how long Cardona will be sidelined. If his injury stretches into the regular season, the Patriots will need to carry Khoury on their roster until Cardona heals. 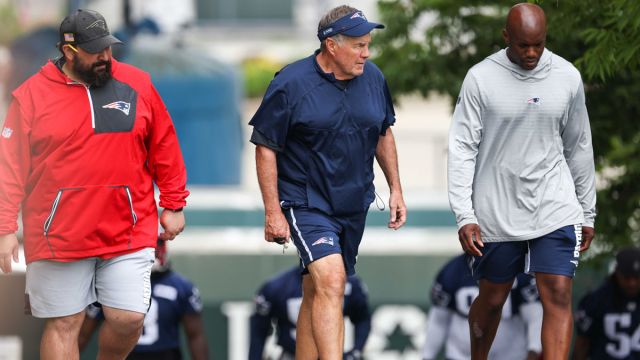