Four Things Patriots Must Do To Upset Tom Brady, Buccaneers In Week 4 Skip to content

The Tampa Bay Buccaneers will be the clear and undisputed favorites when they visit Gillette Stadium this Sunday night for Tom Brady’s much-ballyhooed homecoming.

But a New England Patriots upset, while certainly unlikely, is not unfathomable.

As of Thursday morning, the spread for this game on Draftkings Sportsbook was seven points in favor of the visiting Bucs. The Patriots overcame those same odds just last season, beating the Baltimore Ravens as seven-point home underdogs in a game that ended in a full-blown monsoon.

Now, New England wasn’t facing the defending Super Bowl champions and the greatest quarterback in that game, but still. The point stands. And just as Brady knows everything there is to know about the Patriots defense he’ll be facing this weekend, no coach is more aware of the 44-year-old quarterback’s (few) shortcomings than Bill Belichick.

The Bucs also lost to the Los Angeles Rams last week, led the lowly Atlanta Falcons by three heading into the fourth quarter in Week 2 and won on a last-second field goal in Week 1.

Again, likely? No. But possible? Sure.

Here are four things the Patriots — who sit at an underwhelming 1-2 with two home losses — must do if they hope to spoil Brady’s return:

1. Get Trent Brown back
The offensive line has been arguably the Patriots’ most disappointing unit thus far. And while its struggles can’t be pinned on any single player or position — and rookie quarterback Mac Jones deserves partial blame on some of the hits he’s taken — New England has had its preferred starting five on the field for exactly one series this season. Brown, the team’s starting right tackle, hasn’t played since the opening drive of Week 1, and replacements Justin Herron and Yasir Durant have been inconsistent at best.

Jones has shown an ability to make plays when he’s not immediately overwhelmed by pass rushers. If the Patriots can reinsert Brown against a Bucs front seven that has been less ferocious than expected through three games (32nd in sack rate), that should unlock more offensive success.

Having left tackle Isaiah Wynn active and effective is an important part of this, too. He’s underperformed so far this season and popped up on the injury report Wednesday as one of seven players limited in the team’s first practice of Week 4. If the Patriots are forced to play a backup at either tackle spot, defending this Bucs front will be a tough ask.

Defenders have hit Jones nine and 11 times in the Patriots’ two losses, and many of their offensive issues have stemmed from this lack of protection.

2. Attack Tampa Bay’s depleted secondary
There’s a reason the Bucs felt the need to sign 33-year-old Richard Sherman this week. Their secondary is in rough shape, especially at the cornerback position. Starter Sean Murphy-Bunting is on injured reserve with a dislocated elbow, and his replacement, Jamel Dean, left last week’s game with a knee injury and might not play Sunday.

Sherman said it would be “foolish” to expect him to suit up just says after signing, so the Patriots could see a lot of Dee Delaney — usually a special teamer — opposite starter Carlton Davis, with Ross Cockrell manning the slot. The Patriots don’t have the firepower that previous Bucs opponents like the Rams and Dallas Cowboys boast, but they could find favorable matchups there for Jakobi Meyers, Nelson Agholor and Kendrick Bourne, assuming the O-line can keep Jones upright.

Meyers and Bourne both produced in last week’s loss to the New Orleans Saints, finishing with 94 and 96 receiving yards, respectively. Agholor has been quiet since his strong Week 1 debut, managing just five catches on 11 targets for 38 yards over the last two games.

3. Finish in the red zone
You can’t beat Brady and this Bucs offense (tied for first in the NFL in points scored) by kicking field goals, and that’s what the Patriots have done far too frequently this season. Nick Folk is tied for the NFL lead in field goals attempted and converted (9-for-9), and those have accounted for exactly half of the Patriots’ 54 total points.

New England has needed to rely so heavily on its 36-year-old kicker because its offense repeatedly has had drives stall deep in opponent territory. The Patriots have reached the red zone eight times in three games and scored touchdowns on just two of those visits — a 25 percent conversion rate that ranks dead last in the NFL.

This is where the Patriots’ two big-money tight ends, Jonnu Smith and Hunter Henry, were expected to thrive, but neither has been a major factor thus far, with Smith coming off one of the worst games by any Patriots pass-catcher in recent memory. Just two of their 20 combined receptions this season have come inside the opponent’s 20-yard line.

Big-bodied receiver N’Keal Harry, who was designated to return from injured reserve Wednesday, also could provide red-zone assistance if he’s activated this weekend.

4. Get Tom Brady off his game
Easier said than done, right? Brady, who practiced against the Patriots’ defense every day for two decades, claimed earlier this week that he knows “exactly” how his former club will try to stop him. Opponents have been able to befuddle Brady in the past, though, often by unsettling him with interior pressure.

“We’re a game-plan defense that changes each and every week, so hopefully we’ll have a few wrinkles to throw in there for him,” inside linebacker coach and former Brady teammate Jerod Mayo said Tuesday. “I’ll say this: When you play 20-plus years in the league, you’ve seen a lot of different defenses.”

The Patriots do not want Tampa’s vast array of pass-game weapons — Mike Evans, Chris Godwin, Antonio Brown (who should be back in the lineup after missing last week), Rob Gronkowski — running rampant through a New England secondary that still is without Stephon Gilmore, so preventing Brady from getting comfortable in the pocket will be paramount.

The onus will be on New England’s defensive line and linebackers — who are dealing with injury concerns of their own — to navigate a Bucs O-line that ranks sixth in the NFL in pass-blocking efficiency, per Pro Football Focus. 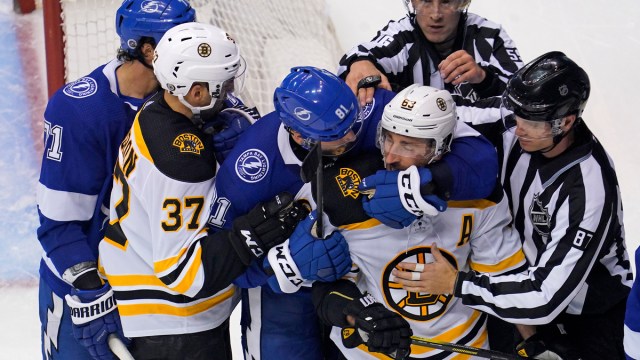 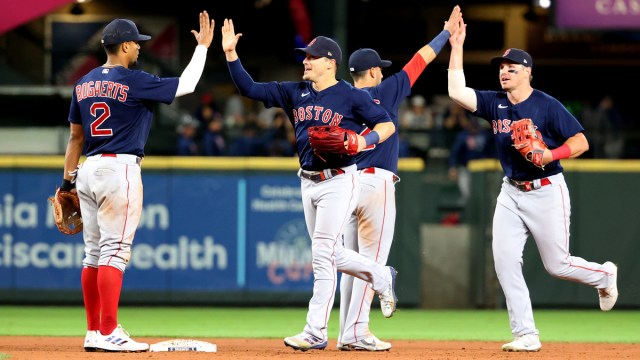