But a similarly impactful transaction took place on the other side of the ball.

After Stephon Gilmore missed all of training camp and the entire preseason, the Patriots opted to leave their star cornerback on the physically unable perform list, making him ineligible to return until Week 7 at the earliest.

Losing Gilmore for at least the first 1 1/2 months of the season leaves a massive void in a reloaded New England defense that otherwise has no glaring weak spots.

Though he didn’t replicate his 2019 NFL Defensive Player of the Year campaign last season, the soon-to-be 31-year-old Gilmore remains one of the league’s premier cover men when healthy, and the Patriots’ depth behind him is suspect.

Jalen Mills, a veteran newcomer who was expected to play a multipositional Swiss Army knife-type role in New England’s secondary, is the most likely candidate to start in Gilmore’s spot opposite fellow outside corner J.C. Jackson, with reliable vet Jonathan Jones manning the slot and Joejuan Williams, Justin Bethel and recently acquired rookie Shaun Wade filling out the depth chart.

Patriots cornerbacks coach Mike Pellegrino on Wednesday discussed the difficulty of replacing a player like Gilmore.

“Any time any player goes out, it’s a little bit of a problem,” Pellegrino said in a video conference. “You’ve got to make some adjustments. But again, we deal with that just by having a strong foundation. Three consistencies in life: change, choice and principle. There’s going to be change, right? You’ve got to make a choice, and you fall back on your foundation, your principles.

“So those guys that are behind him or play with him are up for the challenge. They’re ready to go. So I’m not going to bat an eye; we’re ready to go right now. We would love to have him, but that’s just not the case.”

With Gilmore sidelined, Jackson will take over No. 1 cornerback duties. The fourth-year pro ranked second in the NFL in interceptions last season (nine) behind Miami Dolphins All-Pro Xavien Howard (10) but looked shaky without Gilmore on the field with him.

Last season, Jackson’s four worst performances in terms of passing yards allowed, according to Pro Football Focus, came during the five games Gilmore missed due to injury. Jackson also surrendered four of his five total touchdowns while Gilmore was out, though he did pull down an interception in four of the five games his running mate missed.

Jackson, who checked in at No. 49 on this year’s NFL Top 100 rankings and looked great during training camp, is playing on a one-year restricted free-agent tender that will pay him $3.384 million this season. This is a prime opportunity for the 25-year-old to showcase his CB1 bona fides as he prepares to hit unrestricted free agency for the first time.

“(I’m) just looking for him to play a good, solid game every time he goes out there,” Pellegrino said. “Not to try to do too much — for him to do his job just like we do around here. It’s easy for guys to get kind of distracted with this guy here or that guy there. It is what it is. If he has a quiet game and you don’t say his name once, guess what? He had a fantastic game. So if you guys don’t say his name, he had a great game.”

Williams might not have made the 53-man roster had Gilmore been included. Bethel, an elite punt gunner, typically plays only on special teams, though he did make several strong defensive plays in last Sunday’s preseason finale against the New York Giants.

Wade is an interesting addition to New England’s cornerback mix. Once viewed as a potential top-10 pick, he tumbled all the way to the fifth round after a disastrous senior season at Ohio State. The Baltimore Ravens selected him 160th overall, then traded him to New England last week.

With good length at 6-foot-1, 191 pounds and sound tackling skills, Wade showed promise in the Patriots’ preseason finale but likely will need time to learn the nuances of his new defensive scheme.

“Going back to Ohio State — and I wasn’t his coach then — I think he played sophomore, junior year in the slot and then senior year slid out to the perimeter,” said Pellegrino, who met with Wade during the pre-draft process. “And then, that’s based off team need. So based on team need, he’ll play wherever he’s needed. He’ll play outside, he’ll play inside, just like most of our guys do. … I can’t really give you an answer on where he’ll play. He’ll play based on team need.”

It’s unclear how much of Gilmore’s absence is related to his injury rehab — he had offseason surgery on a partially torn quad — and how much is contract-related. According to a report from NFL Media’s Ian Rapoport, he’s expected to be healthy by Week 3 or 4. Had the team placed him on injured reserve instead, he would’ve only been required to sit out three weeks rather than six.

Gilmore, who’s set to make just $7 million in base salary this season, skipped New England’s mandatory minicamp as part of a contract dispute. He reported to training camp on time and has been an active participant in meetings — Pellegrino calls him “Coach Steph” — but Sports Illustrated’s Albert Breer and ProFootballTalk’s Mike Florio have referred to his presence as a “hold-in.”

Asked in early July whether he’d be healthy in time for training camp, Gilmore told NFL reporter Josina Anderson, “If I need to be.”

ESPN’s Dan Graziano reported Wednesday that “(a)s of this past week, the Patriots were still open to the idea of trading Gilmore,” mentioning the New Orleans Saints as a potential landing spot.

Regardless of how Gilmore’s situation resolves, the Patriots will be without him for the first six games of the season, including matchups with the Tampa Bay Buccaneers (Mike Evans, Chris Godwin, Antonio Brown) in Week 4 and Dallas Cowboys (Amari Cooper, CeeDee Lamb, Michael Gallup) in Week 6.

“It’s next-man-up mentality,” Pellegrino said. “Everybody’s got to get going. Everyone’s up for the challenge, whether it’s J.C., Mills, Joejuan, Justin Bethel, Shaun, Jon Jones. So we’ve got to play guys in different spots — it won’t matter. Because we’re all DBs here, so we’re ready to go.” 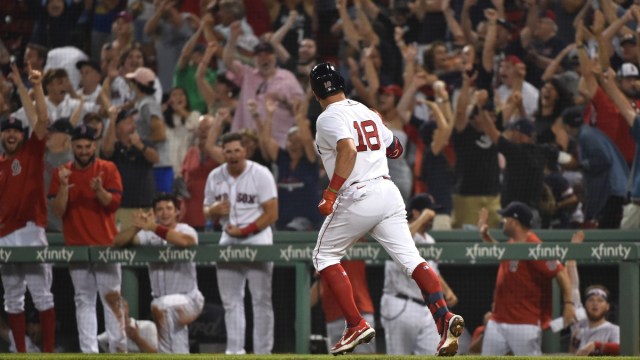 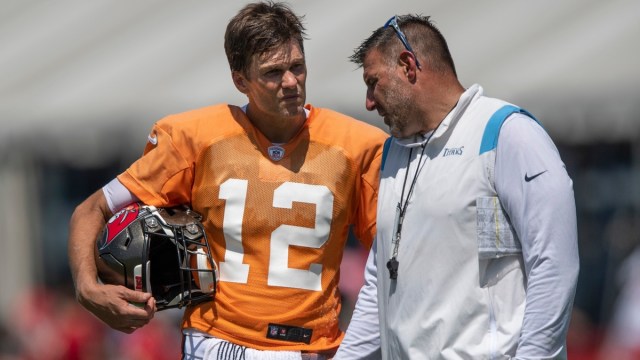 Enjoy Video Of Tom Brady, Mike Vrabel Taking Pot Shots At Each Other