The Boston Red Sox have had their defensive struggles take center stage throughout much of the last month, but manager Alex Cora is hoping the return of Kiké Hernández will provide a major boost.

Hernández, who had not played since Aug. 26 after testing positive for COVID-19, made his return for the Red Sox on Tuesday against the Tampa Bay Rays. Hernández immediately returned to the starting position in center field, a void Boston had trouble filling during his absence.

It means after more than 11 games, the Red Sox will boast an outfield of, from left to right, Alex Verdugo, Hernández and Hunter Renfroe. Cora believes Hernández provides the most value to the team while in center given the fact it allows Boston to fill the corner outfield spots differently than while he was out.

“I think (Hernández) is going to play a lot in center field,” Cora said on a pregame video conference Tuesday. “With the roster where it’s at, and obviously what might happen in the upcoming days when Xander (Bogaerts) comes back, I do believe with (José Iglesias) and playing Kiké sometimes at second we?ll be OK. But I do believe when those three (outfielders) play together, and you saw it there I think it was a month and a half when they did that — it was pretty good.

“Alex in left field is a game changer, especially here (Fenway Park),” Cora continued. “Kiké, he was ranking probably the best defensive center fielder in the big leagues and Hunter, obviously, has done his job in right field. And as a unit they?re really solid. For how much we love to hit, you have to prevent runs. If the ball is in the air, most likely those guys are going to make the plays, and that’s going to help our pitching staff.”

Boston has been plagued by defensive miscues throughout much of the second half of the season. The Red Sox made three costly ones Monday during their loss to the Rays, and it’s not the only example. Cora, however, is hopeful that can and will be changed with the outfield solidified.

“I do believe this unit in the outfield is going to help us,” Cora said. “We saw when they were together for a little bit, for a month, month and a half, they were great. They kept double plays in order. They threw to the right base. They did a lot of good things out there so I think that’s a start.”

The Red Sox certainly will be hoping Hernández can make his impact early and often as Boston hosts the first-place Rays at Fenway Park on Tuesday. First pitch is scheduled for 7:10 p.m. ET, and you can watch it live on NESN. 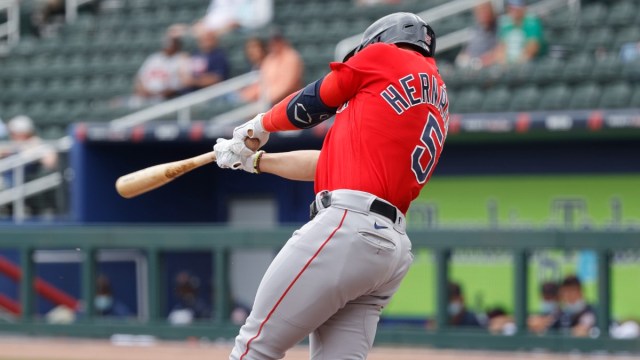