Mac Jones scored his first NFL win on Sunday. But he wasn’t satisfied with the New England Patriots’ offensive performance in their 25-6 waxing of the New York Jets at MetLife Stadium.

Despite starting three drives in Jets territory and another two beyond their own 40-yard line, the Patriots managed just two touchdowns, failing to sufficiently capitalize off New York quarterback Zach Wilson’s four interceptions. They went 3-for-12 on third down and 1-for-3 in the red zone, dropping their season mark in the latter to a lackluster 2-for-7.

“We’ll get better,” Jones, who went 22-of-30 for 186 yards in the win, told reporters postgame. “I think everybody, including anybody who watched the game, could agree that the offense can play better, and we will. The defense did a great job of creating the turnovers. What we talk about all the time playing together and complementing one another — offense, defense, special teams.

“On offense, we definitely feel blessed to win, but at the same time, you’ve got to take it for what it’s worth and move on and try and correct the things that we need to work on.”

What does Jones personally need to work on? He singled out three areas for improvement:

BALL SECURITY
Jones has fumbled in each of the Patriots’ first two games. On Sunday, he held the ball away from his body as Jets defensive lineman John Franklin-Myers arrived for a sack.

“I think my ball security can improve,” Jones told reporters. “I put the ball on the ground twice. But in terms of that, just trying. to learn from that. I’m going to get better at that. Just ways to practice it, whatever it is — somebody hitting the ball during practice. In practice, we don’t hit the quarterback, but there’s going to be ways that we can implement that to improve.”

Fortunately for Jones, Patriots teammates were able to recover both of his fumbles. He has yet to turn the ball over this season.

MAKING CORRECT READS
Earlier this week, offensive coordinator Josh McDaniels said Jones made a few decisions and reads in New England’s Week 1 loss to the Miami Dolphins that the quarterback should have handled differently. Jones felt the same way after Sunday’s victory.

“I think just trying to move the ball, I can definitely stick to my reads a little better,” Jones told reporters. It starts with me. I’ve got to be more vocal again and just in practice, if you go back and look back at the plays that we ran, there’s little improvements we could make. Some plays in the game, we made the improvements; some plays, we didn’t. So you kind of have to do a review of the week and make sure you can learn from your mistakes from practice, from the game, from your routine, whatever it may be.”

ATTACKING DOWNFIELD MORE
Jones operated a conservative passing attack in Week 1. It was even more so on Sunday.

The vast majority of Jones’ pass attempts against the Jets were to receivers near or behind the line of scrimmage. Just four of his 30 throws traveled at least 15 yards in the air, according to NFL Next Gen Stats.

He completed two of those: a 24-yard over-the-shoulder hookup to Jakobi Meyers and a Hunter Henry catch-and-run down the seam that picked up 32.

Jones was asked about his lack of downfield attempts after the game.

“I think it was just me,” he told reporters. “I can push the ball down the field more. (The Jets’ defense) did kind of what we expected them to do. Obviously, they have a good defensive line, (but) I can definitely just hold the ball in a good way. Just maybe move and try to make a better throw downfield on a lot of plays.

“I kind of just have to watch it and see, but when you’re out there, you can see it. You talk about it with Josh and Brian (Hoyer) and then move from there. So we’ll watch it, and we’ll find ways to improve on that.”

Jones has spread the ball around in each of his first two starts, completing passes to eight different players against Miami and seven against New York. Running back James White led all Patriots pass-catchers with six receptions on six targets for 45 yards on Sunday. Wide receivers Meyers, Agholor and Kendrick Bourne caught four, three and two passes, respectively.

“I think for the receivers, they played well, and I need to get them the ball more,” Jones said. “And I will.”

The 1-1 Patriots will host the 1-1 New Orleans Saints next Sunday at Gillette Stadium. 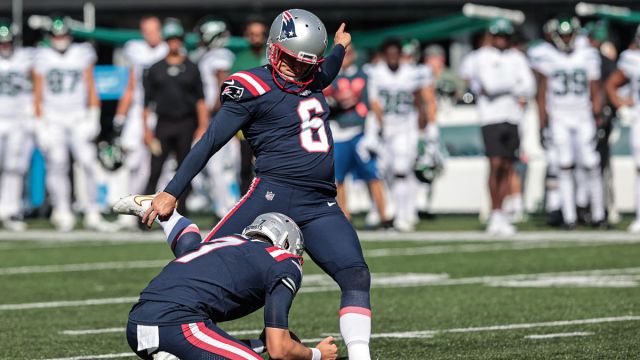 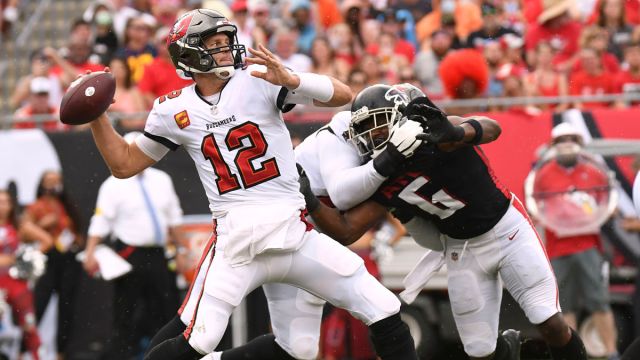 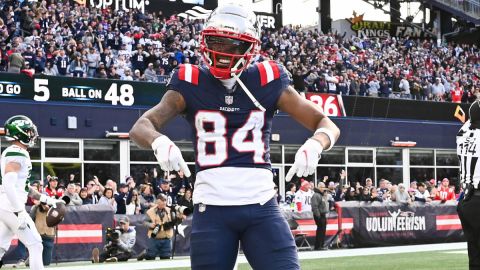