The Boston Red Sox kept the Rays at bay through seven innings, but first-place Tampa Bay snuck in a run in the eighth inning.

Led by Hunter Renfroe, they responded on both sides of the ball to win it 2-1 and improve to 80-62 on the season, gaining valuable ground in the American League East standings. The Rays, meanwhile, fell to 88-52.

ONE BIG TAKEAWAY
Defense may not create offense in baseball, but it certainly makes life easier for the guys at the plate and on the mound.

The Red Sox got back to that Wednesday, first by reinserting Kiké Hernández into center field. He robbed Wander Franco of an extra-base hit, and then Renfroe took over from there, recording yet another nasty outfield assist before throwing Brandon Lowe at third to end the game.

STARS OF THE GAME
— Renfroe earned his 15th outfield assist of the season with an absolute seed in the fourth. He caught Rays center fielder Manuel Margot trying to stretch a single, and sniped him out on the throw to second.

And then for good measure, he hit what ended up being the game-winning home run in the bottom of the eighth, capping off a 2-for-4 showing at the plate with two RBIs.

Of course, you can’t forget his game-ending throw from center.

— None of this happens without Nathan Eovaldi, who threw seven scoreless innings in his start, giving up just three hits and two walks while striking out eight. That will play.

— Hansel Robles was electric closing this one out. The pitcher recorded two strikeouts in the final inning, throwing 11 of his 16 pitches for strikes.

WAGER WATCH
Boston was -115 entering the game, favored to take the final game of the series with Tampa Bay. It was a rollercoaster, but a $115 wager would have won you $100.

ON DECK ON NESN
On to a day off. And then Chicago. The Red Sox begin a three-game series with the White Sox on Friday, with first pitch at 8:10 p.m. ET. 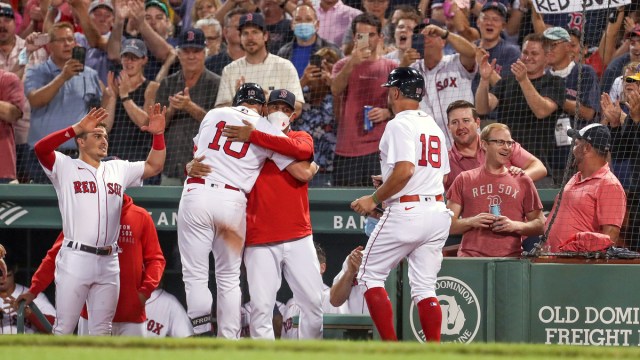 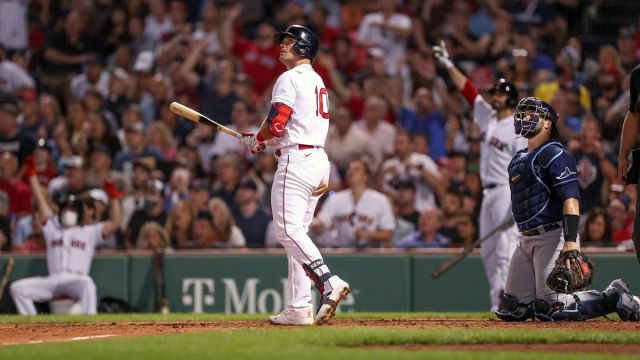