Starting right tackle Trent Brown and linebacker Kyle Van Noy both sat out the team’s penultimate practice of Week 2 as they recover from calf and throat injuries, respectively.

Brown played just seven snaps in New England’s Week 1 loss to the Miami Dolphins. Yasir Durant appeared to be his top replacement during Thursday’s practice, repping with the starting offense during an early team drill. That could change by Sunday, however.

Justin Herron replaced Brown against the Dolphins but was benched for Durant late in the third quarter. Other reserve options include Yodny Cajuste, who was inactive for the Miami game, and Mike Onwenu. Onwenu impressed as a right tackle last season but has worked exclusively at guard since the start of training camp.

A Van Noy absence Sunday could lead to larger roles for Josh Uche and Chase Winovich. The Patriots also could shift Dont’a Hightower, who admitted he struggled against the Dolphins, from inside linebacker to outside linebacker to fill Van Noy’s spot. Rookie edge rusher Ronnie Perkins could slot into the gameday roster to provide additional depth.

Every other Patriots player was present at practice Thursday. New England will practice again Friday before traveling to East Rutherford, N.J., for Sunday’s matchup at MetLife Stadium. Kickoff is set for 1 p.m. ET. 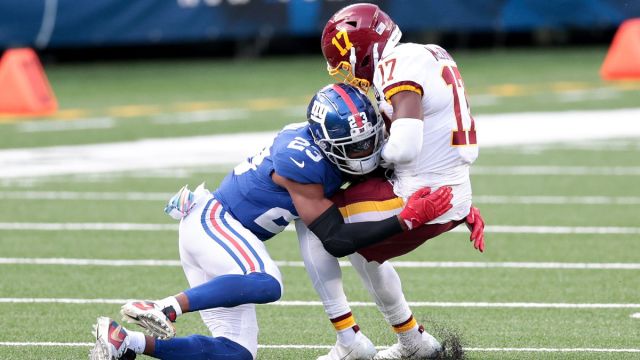