Why Have Patriots Been NFL's Worst Red-Zone Team This Season? Skip to content

Moving the ball deep into opponent territory has not been an issue for the New England Patriots this season.

It’s once they get there that problems arise.

Through two games — a 17-16 loss to the Miami Dolphins and a 25-6 win over the New York Jets — the Patriots’ offense has reached the red zone seven times and scored touchdowns on just two of those trips. That’s a success rate of 28.6 percent, which ranks 32nd — dead last — in the NFL.

Expanding that sample to include drives that reached the opponent’s 25-yard line, the Patriots are just 2-for-10. More than half of their 41 points this season have come on Nick Folk field goals.

As the Patriots prepare for their Week 3 matchup with the New Orleans Saints, we took a closer look at all 10 of their trips inside the 25 to find out what keeps derailing this Mac Jones-led offense.

DRIVE NO. 1
Reached: Miami 9-yard line
Result: Field goal
Key play: Isaiah Wynn holding penalty on second-and-10
A 22-yard third-down hookup from Jones to Jakobi Meyers brought the Patriots into the red zone on their third possession of Week 1, but Wynn’s holding call halted their momentum. A short completion to Jonnu Smith on second-and-20 and a screen to Smith on third-and-14 couldn’t pick up the necessary yardage, and the tight end fumbled on the latter, to boot. (Center David Andrews recovered.)

The Patriots’ issues at right tackle have garnered more attention, but Wynn has struggled from his left tackle spot, too. This was the first of four penalties he’d commit in the first two games.

DRIVE NO. 2
Reached: Miami end zone
Result: Touchdown
Key play: Elandon Roberts roughing the passer on third-and-1
The Patriots got lucky on their lone touchdown drive of Week 1. Roberts ran over rookie running back Rhamondre Stevenson to sack Jones on third down from Miami’s 17, but he hit the QB too low, resulting in a drive-extending penalty. Two plays later, Nelson Agholor sat down in the flat, and Jones hit him for a 7-yard touchdown.

DRIVE NO. 3
Reached: Miami 24-yard line
Result: Field goal
Key play: Damien Harris loss of 4 on first-and-10
A well-timed Dolphins blitz dropped Harris for a big loss, setting up a second-and-14. On the ensuing third-and-8, Jones was hit high and low as he released a pass to Kendrick Bourne that sailed out of bounds. It was one of the few downfield throws Jones has attempted in this area of the field this season. (More on that in a bit.)

DRIVE NO. 4
Reached: Miami 15-yard line
Result: Field goal
Key play: Jakobi Meyers drop on third-and-4
Jones guided the Patriots from their own 31 to the Dolphins’ 21 with a sequence of eight consecutive passing plays. Then, coordinator Josh McDaniels went back to the run, calling back-to-back handoffs to Harris that gained 3 yards apiece. On third-and-4 from the 15, Jones fired a quick out to Meyers that should have been caught for a first down — but also could have been placed better by the rookie quarterback.

The Patriots settled for a field goal that cut Miami’s lead to one early in the fourth quarter. A Tua Tagovailoa interception one drive later set the stage for …

DRIVE NO. 5
Reached: Miami 11-yard line
Result: Fumble
Key play: Damien Harris lost fumble
An absolute killer. The Patriots were well within range for a go-ahead field goal when Harris fumbled on first-and-10 from the 11. The Dolphins recovered and ran out the clock for a season-opening win.

DRIVE NO. 6
Reached: New York 24-yard line
Result: Field goal
Key play: False start on Wynn on second-and-11
Taking over at the Jets’ 35 after the first of Zach Wilson’s four interceptions, the Patriots picked up 11 yards on two Harris carries, then went:

-Screen to Meyers, loss of 1
-False start on Wynn — another costly penalty on the left tackle
-Screen to Agholor, gain of 2
-Short pass to a crossing Smith, incomplete off his hands

Like the Meyers incompletion in Week 1, this one to Smith should have been caught but could have been thrown in a more advantageous spot. Jones sidearmed it while facing interior pressure from stunting D-lineman John Franklin-Myers, and the ball floated on him.

There’s no guarantee Smith would have picked up first-down yardage, but he’s one of the NFL’s best at generating yards after the catch.

DRIVE NO. 7
Reached: New York end zone
Result: Touchdown
Key play: Back-to-back 7-yard carries by James White
New England’s cleanest red-zone execution to date. After a trick-play completion to Smith set the Patriots up at the 14-yard line, White gashed through the Jets’ defense on two inside handoffs out of three-receiver sets.

(The White carries wouldn’t have been necessary had Jones spotted a wide-open Agholor on his pass to Smith, but the result was the same nonetheless.)

DRIVE NO. 8
Reached: New York 21-yard line
Result: Field goal
Key play: Mac Jones intentional grounding on third-and-2
Jones led an efficient two-minute drill as time wound down in the first half Sunday — some of his best stretches since the start of the preseason have come in hurry-up scenarios — but capped it with an obvious rookie error. As he scrambled to avoid the Jets’ pass rush, he spiked the ball in front of him, resulting in a 10-yard penalty for intentional grounding.

Jones argued that White was in the area of his throwaway, but the officials didn’t buy it. Nick Folk bailed out his quarterback by drilling a 49-yard field goal one play later.

By first-year QB standards, Jones’ decision-making has been very good thus far, with zero turnovers through two games while Wilson and No. 1 overall pick Trevor Lawrence are tied for the NFL lead with five interceptions each. But this one was a head-scratcher, as was his ugly backward spike/fumble in Week 1. He’ll learn.

(UPDATE: Video from All-22 angle showed tight end Hunter Henry running free down the right sideline after a coverage bust. But Jones darted out of the pocket when he saw an interior rusher beat left guard Mike Onwenu. Had Onwenu held his block a split-second longer, this easily could have been a touchdown.)

DRIVE NO. 9
Reached: New York 13-yard line
Result: Field goal
Key play: Marcus Maye pass breakup on second-and-9
As was the case on Drive No. 6, Jones stuck to short passes here. Maye broke up his quick strike to Henry on second-and-9, and a speed out to White on third down went nowhere.

Jones has attempted six passes in the red zone this season. One was a throwaway. The other five — including his touchdown to Agholor — all targeted players within 3 yards of the line of scrimmage. Jones is 3-for-6 on red-zone throws and has yet to throw a pass into the end zone.

DRIVE NO. 10
Reached: New York 2-yard line
Result: Field goal
Key play: Damien Harris stuffed on back-to-back carries inside the 5
The circumstances were a bit different on this final red-zone visit, as the Patriots were up big and looking to run out the clock. It would have been nice to see better execution from their goal-line rushing operation, though. Operating out of jumbo personnel, the Patriots had the left side of their line caved in on consecutive plays, resulting in a 1-yard loss on second-and-goal from the 2 and a 5-yard loss on third-and-goal from the 3.

So, what’s been holding back New England’s red-zone offense? As you can see, it’s a mix of penalties, poor ball security, drops (with less-than-ideal ball placement), inconsistent O-line play and conservative play-calling/decision-making.

Jones took his share of the blame during his Monday afternoon appearance on WEEI’s “Merloni & Fauria.”

“They’ve called good plays, and Josh has done a good job preparing me in the red zone knowing what the other team is going to do and stuff,” Jones said. “I definitely can just have those conversations with him to let him know that I can do better because I feel like it’s more on me than anybody else. I can make those tight-window throws — I have in the past — and we can be better.

“It is what it is. We can obviously work on it and maybe come up with some different ways to have creativity or whatever, just to get the offense to come together in the red zone.”

Red-zone success isn’t required to win in the NFL, but it certainly helps. Last season, six of the top seven red-zone offenses made the playoffs, including each of the top four. In 2019, the top three and eight of the top 11 earned playoff spots.

Repairing these flaws should be a priority for the Patriots in the weeks to come. 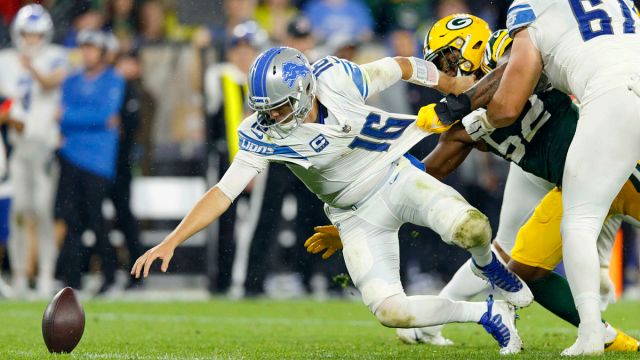 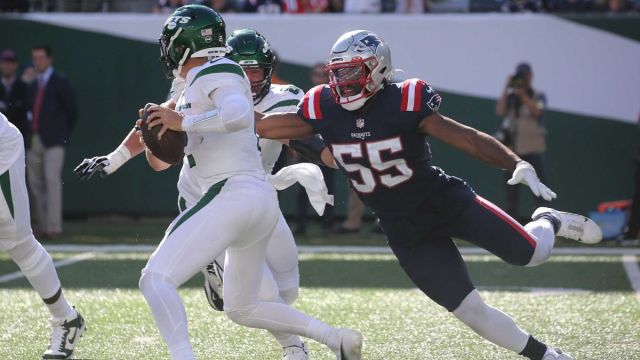