What COVID-19, Being Away From Red Sox Taught Xander Bogaerts Skip to content

Xander Bogaerts wasn’t immune to the COVID-19 outbreak that spread through the Red Sox clubhouse over the past few weeks. But now that the All-Star shortstop is on the other side of things, having returned to the team Sept. 10, he’s picking up even better than where he left off.

Bogaerts was in a pretty serious slump at the plate before his sudden departure from a game against the Tampa Bay Rays on Aug. 31 due to a positive test. He was 8-for-39 with 11 strikeouts in his 10 appearances before landing on the COVID-19 related injured list.

Since returning on Sept. 10, he is hitting .367 through eight games. Overall, he is 11-for-30 and has logged a hit in five consecutive games.

For Bogaerts, who admitted after Saturday’s win against the Baltimore Orioles that he puts a lot of pressure on himself to succeed, the time away gave him an opportunity to get out of his head.

“I kind of was in a pretty rough spot,” he said Saturday. “Being able to get COVID, I know it was bad timing because we were in the thick of the things at the moment, but it kind of helped me relax a little bit more, made me appreciate the game a lot more.

“It’s all I do. It’s all I want to do … just being able to get that itch back to be on the field and help the team, it’s something that I needed.”

The Red Sox pretty much are over the hill when it comes to their COVID-19 outbreak, with the majority of players affected back with the team or going through rehab assignments. And it’s reassuring that they have Bogaerts back mentally and physically, especially considering there will be major playoff implications in pretty much every game left on the schedule. 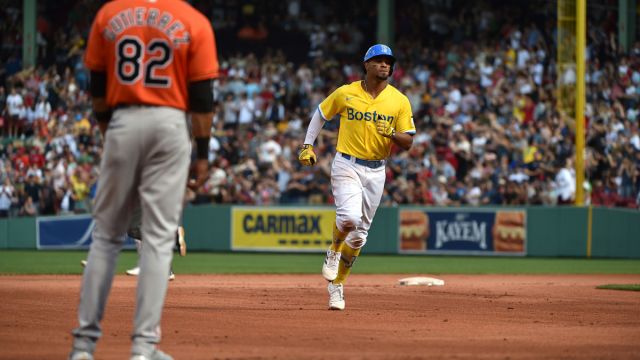