The Boston Red Sox, at this point, are used to playing with their backs against the wall after having to rally in the last few weeks to earn a spot in the American League Wild Card Game in the final day of their regular season.

Now, to advance in the Major League Baseball playoffs, they have to beat the New York Yankees at home — as if the circumstances of an elimination game wasn’t enough motivation.

The Red Sox manager was asked about how he’ll address his team before the most important game of the year against a historically heated rival. According to him, he doesn’t need to.

“We talk after we clinch and that’s it,” Cora said in his pregame availability, via the Red Sox’s live stream. “There’s no rah-rah speeches here. I mean, if you need that, you’re in the wrong business. This is Red Sox-Yankees for the chance to advance in the playoffs. So, yeah, we’re good. We’re good.”

Perhaps insult is enough motivation for Boston. Despite playing in front of their home crowd at Fenway Park, the Red Sox are betting underdogs, with most sports books setting Boston’s moneyline odds at +110 (bet $100 to win $110). And of course, a certain New York media publication printed yet another ridiculous cover to perpetuate the rivalry.

They won’t have designated hitter J.D. Martinez after an ankle sprain, but Boston has good reason to trust Nathan Eovaldi with the ball opposite Gerrit Cole.

Anything can happen when there’s a lot to play for, and the Red Sox certainly have that — and the resolve — to pull it off. 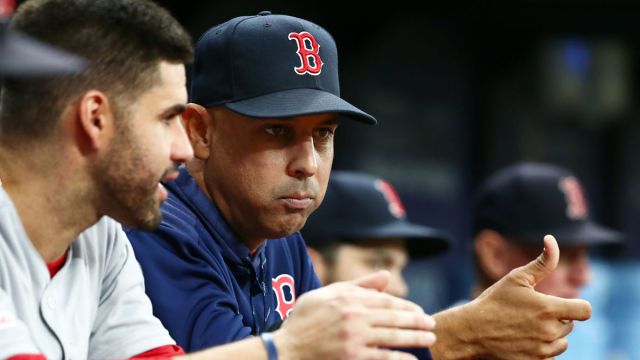