If he were being totally honest, Bill Belichick would have a lot of complaints about the way his team played Sunday at NRG Stadium. The Patriots did plenty of bad things in Houston.

However, the Patriots head coach, like his players, nevertheless sang an optimistic tune after New England’s comeback win over the Texans. And he should have, as the victory potentially saved the season for the Patriots, who showed some mental fortitude after a disastrous first half.

“It’s good to come down here and win,” Belichick told reporters at the beginning of his postgame news conference. “Haven’t done that in a couple years. It certainly wasn’t perfect, but we battled and played better situational football than we have in some of the other games — so that was a plus.

“Gotta give a lot of credit to Josh (McDaniels), the offensive coaches, the offensive line. Those guys did a really good job of hanging in there. Thought they really went about the challenge this week of replacing some good players in that group. I thought they played hard. … Defensively, didn’t have a very good first half but made a big stop at the end of the (first) half.”

Belichick also highlighted the second-half blocked punt that changed the game for the Patriots.

“The blocked punt was a key play in the game for us,” Belichick said. “Even though we only got a field goal out of it. … Thought that was a big momentum play. Thought our kicking game and special teams played well.”

Watch Belichick’s full news conference in the video below:

“Mac gave it to us all day,” Belichick said. “Thought he moved the ball and thought he made a lot of good decisions. There were some checks that he had to make that he made throughout the day. …

“Mac’s been good for us all year in terms of his leadership, his resilience. Always counting on him to do the right thing, and he really does it at a high level. So, it’s been impressive.”

Belichick’s Patriots will look to make it two wins in a row next weekend when they host the Dallas Cowboys. 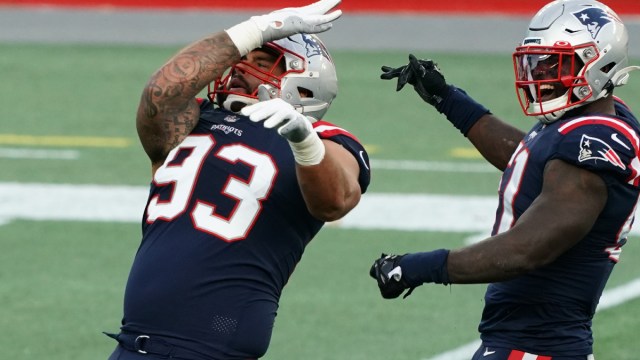 This Patriots ‘Sneaky Playmaker’ Had Turning Point In Win Over Texans