The Boston Bruins, for a number of reasons, struggled last season to get the third line to click.

An offseason makeover ensued, and the Bruins had to have liked what they saw from the new trio on the back end of the middle six.

Headlined by a Jake DeBrusk goal in the third period, which proved to be the game-winner, the unit of DeBrusk, Erik Haula and Nick Foligno was a real tough line for the Dallas Stars to play against Saturday in Boston’s 3-1 season-opening win.

“That line will be hard to play against if they attack like that,” Bruins head coach Bruce Cassidy told reporters after the game. “They (had) legit, clean plays.”

The tic-tac-goal was impressive, but that unit drove play all night when on the ice. Natural Stat Trick had them at 8:19 ice time together with a Corsi For of six and Corsi Against of two. They have the ability to be a sound defensive unit, but the offensive upside of the three is particularly tantalizing, especially since the two wingers historically have played against opposing teams’ top six.

It’s one game, so there’s only so much we really can draw from. But it’s hard not to be optimistic about the future of that group.

Here are some other notes from Saturday’s Stars-Bruins game:

— Jeremy Swayman, with his rock-solid preseason, very much deserved to be the Bruins’ Opening Night starter.

He validated why that was the right choice with his play Saturday.

The rookie netminder turned away all 27 shots he faced from the Stars, the lion’s share of which came in the final 40 minutes. It wasn’t a favorable environment for netminders, with the toasty conditions outdoors contributing to some choppy ice, especially late in periods.

Luke Glendening beat Swayman clean on the one goal he allowed, but otherwise the netminder was composed and tough to crack, stopping all three of the high-danger chances against him.

— Brad Marchand, who historically has tortured the Stars, was everywhere for the Bruins. He had two goals, one on a penalty shot and the other an empty-netter, and both were well-earned tallies.

Marchand has scored at a meteoric pace the last few seasons. It appears he is intent on keeping it that way.

Among other things he’s keeping the same this season is his sense of humor. That was clear with the analysis of his penalty shot goal.

“The only thing I was thinking was ‘Don’t miss it,'” he quipped.

— Here’s a stat that will surprise you: Mike Reilly and Brandon Carlo each had four shots on net. If Charlie McAvoy spends much of the season with Derek Forbort, the Reilly-Carlo duo has the chance to lead Boston’s defensive pairings in shot attempts.

— Speaking of shot attempts, the second line had many of them. Though they weren’t rewarded with a goal, the Taylor Hall-Charlie Coyle-Craig Smith trio outshot the Stars 14-3 in 10:13 ice time. They’ll eventually get through, so that was a nice start.

— The Bruins’ next two games will be nationally televised. They’ll be back on NESN next Sunday for a matinee against the San Jose Sharks. Until then, it’s a meeting with the Philadelphia Flyers on Wednesday and the Buffalo Sabres on Friday. 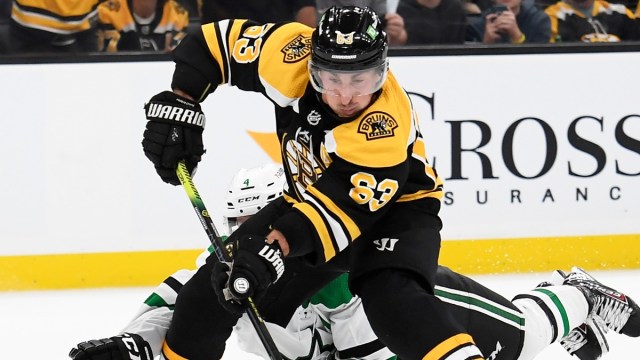