“After the release of the Jenner & Block investigative report on Tuesday afternoon, we have continued to diligently review the information within that report, in addition to new information that has recently become available. It should go without saying that the conduct described in that report is troubling and inexcusable. It stands in direct contrast to our values as an organization and what the Florida Panthers stand for. No one should ever have to endure what Kyle Beach experienced during, and long after, his time in Chicago. Quite simply, he was failed. We praise his bravery and courage in coming forward.”

They did not announce the interim coach.

ORIGINAL STORY: Joel Quenneville may have coached his final NHL game with the Florida Panthers.

As the details of the sexual assault scandal involving the Chicago Blackhawks continue to emerge, ESPN’s Kevin Weekes reported Thursday that there would be “a coaching change coming shortly” within the organization.

David Dwork of WPLG 10 News in Miami said shortly after Quenneville “is out as Panthers head coach.”

Quenneville was the head coach of the Blackhawks in 2010, the season in which former player Kyle Beach said video coach Brad Aldrich sexually assaulted and harassed him. According to an investigation, Quenneville had knowledge of the situation, and then-general manager Stan Bowman said Quenneville told him the team “could not deal with this issue” in the midst of their playoff run.

Beach appeared on TSN on Wednesday, and he said there was no doubt Quenneville knew about what he was enduring.

“I’ve witnessed meetings, right after I reported it to (Blackhawks mental skills coach) James Gary, that were held in Joel Quenneville’s office,” he said. “There’s absolutely no way that he can deny knowing it and there’s absolutely no way that Stan Bowman would make up a quote like that, to somebody who served his organization and his team so well.”

NHL commissioner Gary Bettman on Thursday met with Quenneville, Panthers team president Matt Caldwell and general manager Bill Zito. The meeting came hours after Quenneville coached the undefeated Panthers against the Boston Bruins on Wednesday, and Zito declined to comment when pressed by media members about the decision to keep Quenneville behind the bench.

Weekes reported longtime coach and current ESPN analyst John Tortorella may return to the bench to take over for the Panthers. 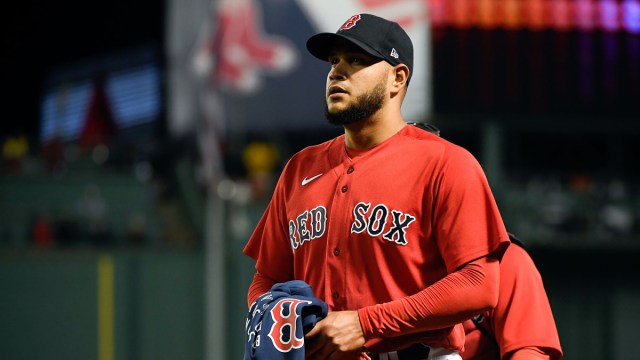 Did Kiké Hernández’s Versatility Hold Him Back From Golden Glove Award?