Rookie quarterback Mac Jones completed 24 of 36 passes for 307 yards — his first 300-yard game as a pro — and two touchdowns for the victors. The Jets lost Zach Wilson to a knee injury in the second quarter. Fourth-year quarterback Mike White took over and completed 20 of 32 passes for 202 yards and one touchdown to go along with two interceptions.

The Patriots improved to 3-4 with the victory while New York fell to 1-5.

STUDS
Christian Barmore, DT
With the Patriots dealing with multiple injuries on the defensive line, Barmore, who also dealt with a shoulder injury during practice all week, saw increased playing time. The rookie made the most of it. Barmore was a force in pass rush, and also did a good job defending the run. He continues to look like a great draft pick.

Brandon Bolden, RB
With Rhamondre Stevenson a surprise inactive, Bolden saw increased usage in the passing game and enjoyed a strong performance. The veteran racked up 79 receiving yards and a score on six receptions.

Patriots fans might get tired of seeing Bolden on the field over younger options, but he remains a reliable, effective player for New England.

Damien Harris, RB
Another great game from the third-year back. Harris finished with 106 yards and two touchdowns on 14 carries. It was his third 100-yard game of the season and sixth of his career. When he’s healthy, and when his offensive line is functional, Harris is one of the more productive running backs in the game.

DUDS
N’Keal Harry, WR
It’s not all his fault, as the Patriots definitely could do a better job of putting him in a better position to succeed. However, the 2019 first-round pick caught only a garbage-time reception in the fourth quarter and now has just three catches since coming off injured reserve in Week 4. Harry saw two targets a week after seeing zero targets. He’s a non-factor.

Kyle Dugger, S
Dugger is a tough player to figure out. He’s freakishly athletic and great both at rushing the passer and defending the run, but remains unreliable in pass coverage. During the second quarter, he gave up a big third-down play to tight end Ryan Griffin and committed a 46-yard pass interference on the next play, putting New York on the goal line.

His interception in the second half was a fine play but does not erase the mistakes he made throughout the rest of the game.

Jalen Mills, CB
Wasn’t horrible, but had some issues in coverage and gave up the first Jets touchdown. Mills has been good more often than not this season, but he also has a penchant for giving up big plays. 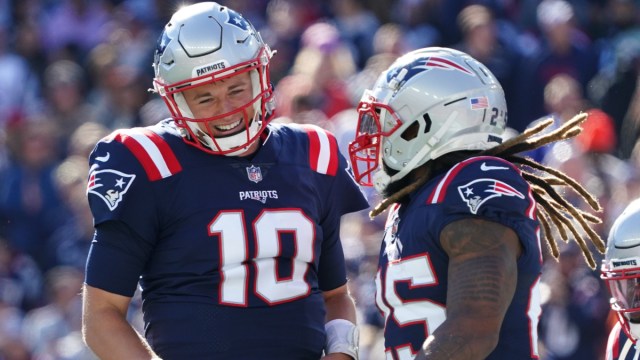