The New England Patriots lost to Tom Brady and the Tampa Bay Buccaneers 19-17 on Sunday night. Here are six things we learned in that highly anticipated Week 4 contest at Gillette Stadium:

1. The Patriots’ defense did its job
The Bucs entered Sunday tied for the NFL lead in points per game (34.3), and the Patriots held them to a single touchdown and four field goals. Edge rusher Matt Judon — New England’s defensive MVP through four weeks — spent the night harassing Brady, who completed just 51.2% of his passes (22 of 43) and finished without a touchdown pass for the first time since Week 9 of last season. That also was the last time Tampa Bay scored fewer than 24 points in a game.

Brady had some success targeting his talented wideouts — Mike Evans, Chris Godwin and Antonio Brown all had receptions of 27 or more yards — but couldn’t generate much movement in the red zone, where the Bucs went 1-for-4. One of their most important plays came against a Patriots backup, as Brown beat Justin Bethel for a third-down conversion while Jonathan Jones briefly was sidelined with an injury. Ryan Succop kicked what proved to be the game-winning 48-yard field goal four plays later.

In their four games, the Patriots’ defense has allowed 17, six, 21 and 19 points. And it could get Stephon Gilmore back in three weeks.

2. Mac Jones continues to look the part
This was a statement performance from the Patriots’ rookie quarterback, who nearly led his team to an upset victory. Despite facing heavy pressure from the Bucs’ pass rush, Jones completed 31 of 40 passes (77.5%) for 275 yards and two touchdowns with one interception. During one stretch, he rattled off 19 consecutive completions, including scores to Hunter Henry and Jonnu Smith. On his second touchdown drive, he went 7-for-7 with completions to six different receivers.

Jones had a chance to lead a game-winning two-minute drill, but it stalled when his pass to an open Jakobi Meyers was batted at the line. Rather than attempt to convert a fourth-and-3 near midfield with 59 seconds remaining, Bill Belichick sent kicker Nick Folk out to try a 56-yard field goal. It hit off the left upright, ending New England’s comeback bid.

Teammates raved about Jones after the game, with receiver Kendrick Bourne saying he “looks like a baby Tom (Brady)” and safety Devin McCourty saying he “has everybody’s trust in that locker room.” He’s a keeper.

3. The offense seemed to fix some of its issues …
The good: The tight ends were more involved, with Henry and Smith catching their first touchdown passes of the season. The Patriots also were much better at finishing drives, finding the end zone on each of their two red-zone trips.

4. … but certainly not all of them
The not-so-good: The offensive line still struggles to keep Jones upright. Tampa’s pass rushers bagged four sacks (including two by rookie Joe Tryon-Shoyinka) and recorded 12 quarterback hits. This is a talented Bucs front but one that entered the weekend ranked 32nd in the NFL in sack rate and did not have starting edge rusher Jason Pierre-Paul. Left guard Mike Onwenu also was flagged for holding twice on one drive and later was benched for Ted Karras. In the Patriots’ three losses, they’ve allowed nine, 11 and 12 QB hits.

This also was the Patriots’ worst rushing performance of the season. Meyers, a wide receiver, had more completed passes off trick plays Sunday night (two) than New England had rushing yards (-1). Lead back Damien Harris finished with -4 yards on four carries.

The biggest problem for the Patriots’ offense, though, according to multiple players, has been turnovers. They’ve lost the turnover battle in all three of their losses this season. On Sunday, Jones threw an interception (into tight coverage while being hit) and running back J.J. Taylor lost a fumble. Taylor’s was especially painful, as it occurred at the Buccaneers’ 28-yard line.

5. The Patriots might need to do something at running back
James White is done for the season, and neither Taylor nor rookie Rhamondre Stevenson has looked capable of taking on even part of White’s workload. Stevenson was a healthy scratch for the third straight week, proof that the Patriots don’t trust him even with White sidelined. Taylor has four carries for 5 yards and three catches for 4 yards this season. Both have lost fumbles despite playing a limited number of snaps.

Brandon Bolden has looked like the most capable replacement for White, and he had a nice game as a pass-catcher Sunday, snagging all six of his targets for 51 yards. Still, he offers limited upside as an offensive weapon outside of his blitz pickup skills.

Would the Patriots consider swinging a trade for Rex Burkhead, whom they’ll see when they visit the Houston Texans this week? Burkhead has seen limited playing time in Houston’s crowded backfield and obviously knows New England’s offense.

6. The uncharacteristic sloppiness continues
The Patriots were penalized eight times for 77 yards. Among the most costly: an unsportsmanlike conduct penalty on Matthew Slater later that negated a fumble on a punt return (officials ruled Slater ran out of bounds and did not immediately reenter the field) and a defensive pass interference call on Kyle Van Noy that helped set up the Bucs’ game-winning field goal. They also had a 12-men-on-the-field penalty that turned a third-and-6 into a third-and-1. Tampa Bay converted and eventually kicked a field goal.

Between penalties and turnovers, poor discipline has killed the Patriots this season. It’s a major reason why they’re sitting at 1-3, their playoff chances growing slimmer each week. Only 8.7% of the NFL teams that lost three of their four games went on to make the postseason. The expanded playoff format increases those odds to an extent, but the Patriots have put themselves in a precarious position with more than three-quarters of the season still to play. 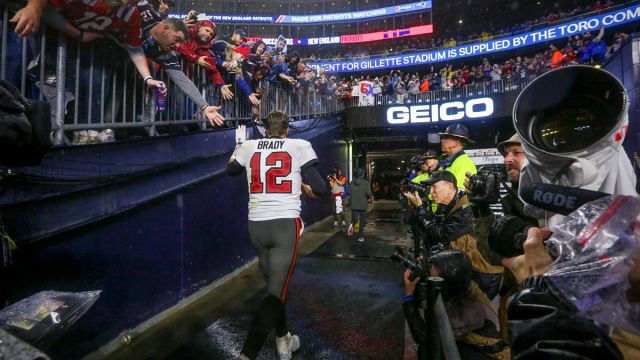 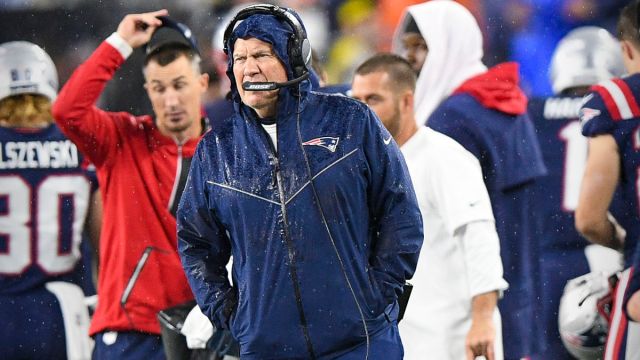