Somehow, someway, the Patriots beat the Houston Texans, 25-22, on Sunday.

New England played sloppy, undisciplined football and trailed for much of the afternoon at NRG Stadium. But Mac Jones stepped up in the fourth quarter and Nick Folk eventually delivered a game-winning field goal.

The Patriots improved to 2-3 with the win, while the Texans dropped to 1-4 with the loss.

Here are the top highlights from Sunday’s game between the Patriots and Texans:

— New England allowed Houston to chew up 10 minutes while driving 79 yards on 18 plays for a score. Antony Auclair hauled in the touchdown reception from Davis Mills.

It was an alarmingly awful start for the Patriots defense, which got somewhat bailed out by Kai Fairbairn missing the extra-point try.

— New England responded with a touchdown of its own. Lined up in wildcat formation, Damien Harris scored from 1 yard out.

Folk missed his extra-point attempt, too.

— The game got certifiably drunk on the next drive, as Texans receiver Chris Moore broke out for a 67-yard touchdown reception. It was an embarrassing display of defense from Devin McCourty and J.C. Jackson.

— The Patriots seemingly responded with another touchdown run from Harris, but the third-year back coughed the ball up on the goal line. The play initially was ruled a touchdown but was controversially overturned upon review.

— Houston came right back with a field goal drive, highlighted by this 40-yard gain by Chris Conley on fourth down:

— Jones made a big mistake on New England’s first drive of the second half, throwing an interception to Lonnie Johnson. Nelson Agholor could’ve battled more at the top of his route, but it still was a poor throw by Jones.

— And the Texans capitalized with a flea flicker 37-yard touchdown pass to Conley.

— The Texans, with no reason to get cute, gave the Patriots a gift with this disaster:

Folk eventually kicked a 52-yard field goal to make it a 10-point game.

— The Patriots got the ball back, leading to another field goal. Then, after Houston missed a field goal of its own, Jones found Hunter Henry on third down for a touchdown. Folk tied the game with his extra point.

— Jamie Collins made his presence known on the next Texans drive with a sack of Mills. New England eventually forced a punt.

— This huge 24-yard run for Brandon Bolden helped get the Patriots in range for the eventual game-winning field goal.

And here’s the game-winner from Folk: 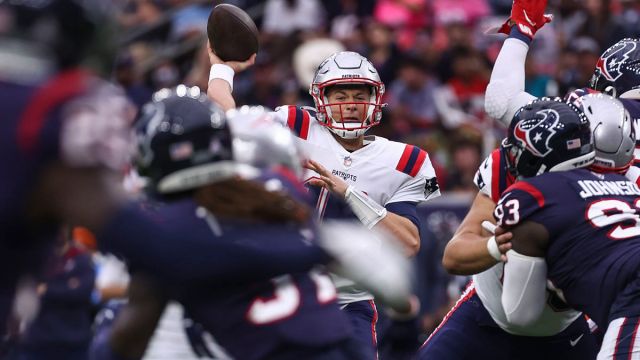 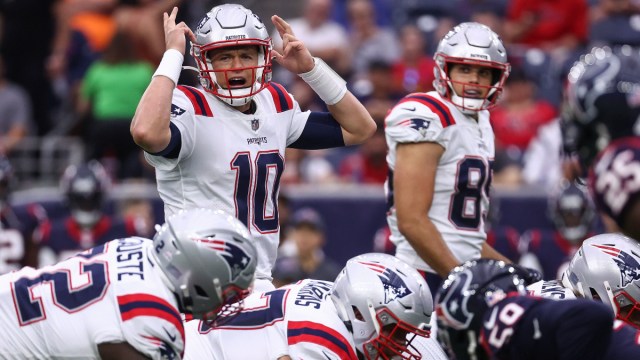