The Boston Red Sox on Tuesday morning announced their roster for the American League Wild Card Game against the New York Yankees. Since it is considered its own postseason round, the Red Sox will be able to make changes should they advance to the AL Division Series.

Here are a few thoughts and takeaways on the group Boston chose for Tuesday night’s playoff game at Fenway Park.

— It shouldn’t come as a surprise that Chris Sale was left off. Although he only went 2 1/3 innings Sunday against the Washington Nationals, he threw 62 pitches. That’s a lot to ask for him to pitch on one day’s rest, even though he was willing to do so.

Further, if Sale actually did pitch Tuesday, he likely wouldn’t be as effective, and it probably would force the Red Sox to wait longer to use him in the ALDS should they make it.

— The J.D. Martinez absence hurts just by virtue of who he is, but conversely, it does allow the Red Sox to keep Bobby Dalbec’s bat in the lineup while not needing to play Kyle Schwarber at first base.

— Perhaps a more surprising omission from the roster than anyone else is Hirokazu Sawamura, especially with Matt Barnes playing over him. Sawamura was a bubble guy, and the Yankees generally have fared well against him this season.

In seven appearances (6 2/3 innings) against the Yankees, Sawamura has given up two runs (both earned) with five hits, six walks and 10 strikeouts. Two of the five hits were home runs, while one other was a double.

Sawamura has been a bit more erratic than usual lately, so that coupled with his history against New York, points to the logic of leaving him off.

— Interestingly, Josh Taylor is on the roster. He’s been on the injured list due to a back strain. Taylor was downright elite earlier this season, but he has had a tumultuous back half. We can’t imagine he would be used in a high-leverage situation, having been injured and not pitched since Sept. 22.

— Bringing up Duran was a no-brainer. Speed, especially in the late innings, is key in these games, and Duran is without question the fastest player the Red Sox have on their 40-man roster.

— Now knowing the roster, here’s our best guess for the lineup against Gerrit Cole:

— As far as the rotation, the Red Sox probably will ride Nathan Eovaldi as far as they can take him, but he’ll obviously have a short hook. If the Red Sox get ahead early, we could see them turning to Garrett Richards to eat a few innings. If it’s close and they have to go to the bullpen, Garrett Whitlock, Tanner Houck, Eduardo Rodriguez and Ryan Brasier all seem most likely to get called into duty.

— Managing in the playoffs is a totally different ballgame, and Red Sox manager Cora wasn’t afraid to go to starting pitchers in big spots back in 2018. One would think that, short of disaster, one of Tanner Houck, Eduardo Rodriguez and Nick Pivetta would effectively be off-limits so as not to burn every starter in the event of reaching the ALDS.

Then again, the Red Sox have to win Tuesday to even get to the ALDS. So, they could go to any pitcher in a given moment and figure out Thursday later on if they need to.

— A friendly reminder that while the game is on ESPN, NESN will carry a full hour of pregame coverage at 7 p.m. ET, as well as postgame coverage immediately following the final out. 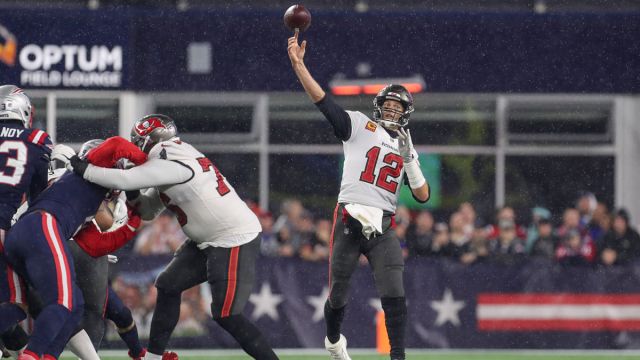 How Tom Brady Felt About Going Up Against Former Patriots Teammates