The Boston Red Sox used four home runs in Game 3 of the American League Championship Series to claim a dominant 12-3 victory over the Houston Astros at Fenway Park on Monday night.

The Red Sox now take a 2-1 lead over the Astros in the best-of-seven series.

ONE BIG TAKEAWAY
The Red Sox bats traveled from Houston to Boston with no problems at all. Boston scored 12 runs on 11 hits including a six-run second inning which featured a grand slam — yes, another one — by Kyle Schwarber (1-for-4, four RBIs). Boston now has three grand slams during the ALCS, which is a record for the most in a single postseason series.

And while Schwarber’s 430-foot blast to right field certainly was the most notable, the Red Sox continued to tack on early and often. Christian Arroyo (1-for-4, three RBIs) sent a slider into the Green Monster seats for a two-run shot in the third inning. It gave Boston a 9-0 lead before recording nine outs. J.D. Martinez (2-for-3, two RBIs, two runs) later came away with some much-appreciated insurance, as the designated hitter sent a two-run bomb to deep left in the sixth. And then it was Rafael Devers to conclude things with one of his own in the eighth.

STARS OF THE GAME
— Eduardo Rodriguez put together an impressive, six-inning start and helped save the Red Sox bullpen for another day. The left-hander limited the Astros to three runs on five hits with seven strikeouts and no walks allowed. His lone blunder was a three-run home run allowed to Houston’s Kyle Tucker in the fourth inning. Rodriguez was the first left-hander with seven or more strikeouts and no walks in a postseason game at Fenway Park, as noted on the FS1 broadcast.

— While Schwarber, Arroyo and Martinez came away with the loudest hits of the game, it shouldn’t surprise anyone that Kiké Hernández continued to swing a red-hot bat for the Red Sox. Hernández finished the game 2-for-4 with singles during both the six-run second and three-run third.

— Christian Vázquez was Boston’s third batter (Hernández, Martinez) with multiple hits. The Red Sox catcher finished 2-for-4 with two RBIs and two runs scored. His RBI single in the second inning was Boston’s first run of the game before Vázquez hit a second RBI single one inning later.

WAGER WATCH
There was money to be made in a variety of ways Monday night. Martinez was 4-to-1 to hit a home run — a $100 bet would have paid out $500 — while Devers (3-to-1) and Schwarber (+280) presented some value themselves, according to DraftKings Sportsbook. And for those confident in Rodriguez, the Over 3.5 (-130) on his strikeout prop was in the bag after the second inning as four of the first six outs came by strikeout.

ON DECK AT NESN
Immediately following the conclusion of Game 3 on Monday night, be sure to tune into NESN to watch postgame coverage. NESN will also air an hour of pregame coverage starting at 7 p.m. on Tuesday before the Red Sox and Astros take the field for Game 4. First pitch is scheduled for 8:08 p.m. ET. 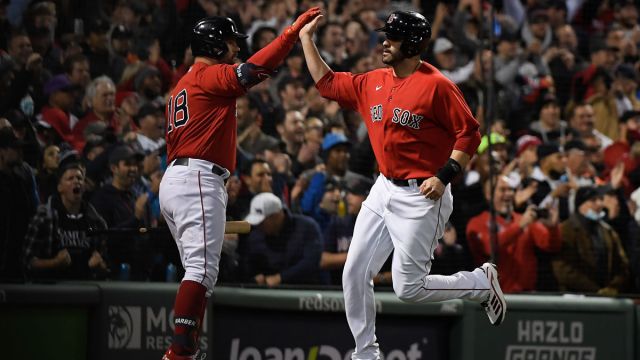 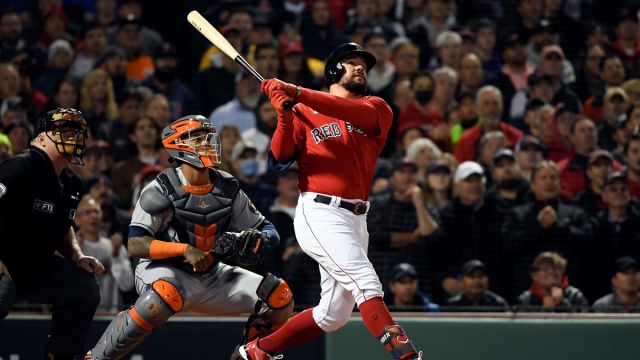