The Boston Red Sox earned a 6-4 walk-off win courtesy of Christian Vázquez during Sunday?s Game 3 of the American League Division Series against the Tampa Bay Rays at Fenway Park.

Boston takes a 2-1 lead in the best-of-five series. The Red Sox will have a chance to advance to the AL Championship Series with a win on Marathon Monday at Fenway Park.

ONE BIG TAKEAWAY
Vázquez sent Fenway Park into pandemonium with his two-run home run in the bottom of the 13th inning Sunday night. The Red Sox catcher took a 94 mph fastball 394 feet to Green Monster seats in left-center field. Hunter Renfroe ended up being the game winning run after reaching base on a one-out walk on six pitches.

Prior to the walk-off home run, the Red Sox were 2-for-10 with runners in scoring position and left 10 runners on base, but Boston ultimately did enough in what proved to be a bizarre 13th inning. The Rays left runners stranded at second and third in the top half of the 13th inning after Tampa Bay’s Kevin Kiermaier had a would-have-been-run-scoring hit called a ground-rule double after it bounced off the wall, then Red Sox outfielder Hunter Renfroe before bouncing over the right-field fence.

STARS OF THE GAME
— Nick Pivetta put together an electric performance in relief, and gave the Red Sox a chance to win for a second straight outing. Pivetta got the ball for the 10th, 11th, 12th and 13th frames, going four innings on just two days rest after pitching 4 2/3 innings in Game 1. The right-hander allowed three hits while throwing 67 pitches with seven strikeouts. He had a stretch where he retired seven straight batters, and struck out four straight.
— Nathan Eovaldi thankfully steadied the ship in regards to the team’s recent starting pitching woes. Eovaldi, who entered Sunday after Boston had each of its last two starters throw two innings or less, went five innings. He overcome an early two-run home run by Austin Meadows in the first inning to retire 12 of the next 14 batters he faced (one walk, error). Eovaldi allowed just three hits and one walk in his five innings while striking out eight Rays batters as he threw 58 of his 85 pitches for strikes.

— Kiké Hernández continued his red-hot division series in Game 3. Hernández went 3-for-5 with a solo home run in the fifth inning, setting a postseason record with eight combined hits in the last two games. The Red Sox center fielder had a string of seven hits in seven consecutive at-bats before his screaming line drive in the seventh found the glove over Rays third baseman Joey Wendle. Hernández recorded a pair of RBIs and a run scored to go along with his team-high three knocks. Kyle Schwarber also had three hits for Boston.

WAGER WATCH
As you would expect, the moneyline was moving rapidly throughout the 13-inning contest, as depicted by DraftKings Sportsbook. The Red Sox were +165 after trailing 2-0 in the first inning, a. -950 favorite when reliever Austin Davis entered the game with two outs in the seventh inning, -125 entering the 10th and -185 entering the bottom half of the 11th.

ON DECK AT NESN
Following the conclusion of Game 2, be sure to watch postgame coverage on NESN immediately after the final out. The Red Sox will return to Fenway Park on Monday for Game 4 against the Rays, and you can watch pregame coverage starting at 6 p.m. ET before first pitch at 7:07 p.m. 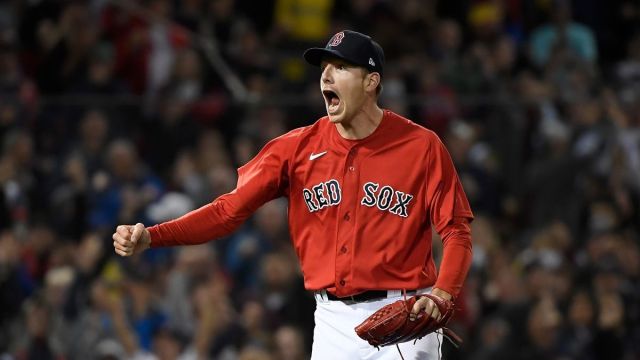