Waltham High School athletic director Steve LaForest has found himself running back and forth to the attic in search of old Waltham High baseball shirts.

LaForest credits Red Sox slugger Kyle Schwarber, perhaps better known now as “Kyle from Waltham,” for this new activity. Schwarber, after all, has played right into a humorous shtick, to the benefit of the greater Boston area — and Waltham, specifically.

Schwarber helped the shtick reach new heights Monday night when he wore a T-shirt representing the Hawks of Waltham High School during his postgame news conference after the Red Sox claimed a 2-1 series lead in their American League Championship Series against the Houston Astros.

“He’s been great with it and I think it’s put a lot of smiles on peoples’ faces in the city of Waltham,” LaForest told NESN on Tuesday before Game 4 at Fenway Park, where he’s hoping more of those Waltham baseball shirts will be shown off.

Schwarber, of course, is not from Waltham, Mass. He actually shouted out his native Middletown, Ohio, during Monday’s press conference, but he nevertheless has become Waltham’s adopted son in short order.

“Waltham, I guess that’s where I’m from, according to people from Boston,” Schwarber said after Monday’s win. “I guess Middletown, Ohio, is not a real place anymore.

Well, it all started with Barstool Sports’ “Section 10 Podcast,” hosted by Jared Carrabis, Steve Perrault and Coley Mick. They dubbed Schwarber “Kyle from Waltham” as a way of depicting the 28-year-old as similar to a typical Massachusetts resident.

It’s safe to say after a few months — and especially with the audience that Game 3 provided — the nickname has caught on. Barstool Sports now is selling merchandise to drive the point home further.

“A lot of kids have seen it, the coaches are all aware of it. Everyone is like ‘This is awesome,’ ” LaForest said. “A lot of people that aren’t aware are like, ‘Oh, when did he play? Did he play?’ So it’s been fun.”

LaForest acknowledged students heard about “Kyle from Waltham” about a month ago, as they are more familiar with the podcast. LaForest himself heard about it roughly a week ago, but he didn’t know Schwarber would be representing the athletic department Monday night.

LaForest actually said the school was hoping to get “a little package” over to Schwarber, with an old Waltham High School No. 18 baseball jersey and some old hats.

“We’ll see if we can keep it going for a bit longer,” LaForest said. ” … Hopefully there will be a few in Fenway (for Game 4).”

The “Kyle from Waltham” running joke isn’t just limited to the athletic department, either.

The official City of Waltham Twitter account shared a few comical posts Monday, including one that expressed how “proud” they are of “Kyle from Waltham.”

Another tweet, which came in response to Carrabis, joked about the city putting together “an early unveiling” of a new street sign. The tweet included a photoshopped picture of a sign that read: “Kyle Way.”

The Waltham Boys and Girls Club got in on the fun, too. The “hometown” organization wished ‘Kyle from Waltham’ well as the Red Sox try to clinch the American League pennant. Their tweet even prompted a response for Schwarber himself.

And if you needed any more evidence of the community buying in, Pizzi Farm in Waltham introduced a “Kyle from Waltham” ice cream sundae Tuesday. It will be available throughout the Red Sox’s postseason run and will benefit The Jimmy Fund.

The mayor of Waltham, Jeannette A. McCarthy, thinks it has been fun to see the story develop — even though she joked about how Schwarber wasn’t able to pronounce “Waltham” correctly Monday.

LaForest added: “A lot of people at the high school and then out in the community have commented on it, whether it be on Facebook or Twitter, and everyone seems to be having fun with it, enjoying it. … And he’s handled it with, I’m sure a lot of athletes would be like, ‘What is this?’ But he’s been great with it, joking.”

Schwarber certainly has become a fan favorite in a short amount of time, as Red Sox chief baseball officer Chaim Bloom brought the left-handed hitter to Boston ahead of this year’s MLB trade deadline. He’s endeared himself to the fanbase with his game-changing hits, his willingness to serve as a spokesperson after bad stretches and, clearly, his sense of humor.

It seems like the small town kid from the Midwest is doing just fine in the big city. 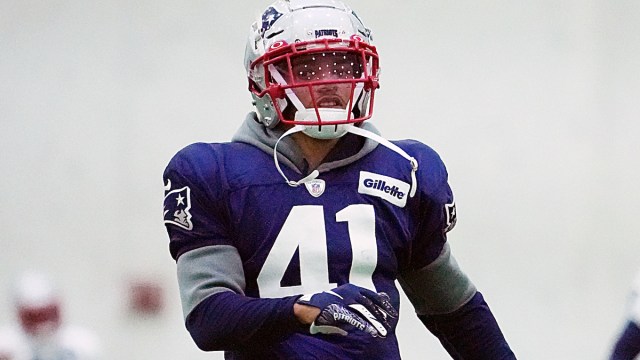