BOSTON — The Boston Bruins used a three-goal second period to defeat the lowly Ottawa Senators, 3-2, at TD Garden on Thursday.

The Senators led 1-0 after the first period thanks to Massachusetts native Zach Sanford, but Boston escaped unscathed after a back-and-forth middle frame to improve to 6-4-0. The Senators dropped to 3-8-1.

ONE BIG TAKEAWAY
The Bruins lacked some urgency in the first period, failing to capitalize on power plays and exiting the frame with a 14-11 advantage on shots but a 1-0 deficit to show for it.

But the second period showed they had some life in them. They scored all three of their goals in the frame, highlighted by an intense 30 seconds that included pretty much everything we love about hockey: Connor Clifton dropped the gloves, Brad Marchand was whistled for roughing and the sequence was capped off with the eventual game-winner from Patrice Bergeron.

It was hard to quiet the Boston offense after that one, as they finished the night looking much more like themselves.

STARS OF THE GAME
— Bergeron became the Bruins’ goal-scoring leader with his fifth goal of the season, and it was a much-needed point for the Bruins — putting them up 3-2 at 18:40 of the second period. (We wanted to put Charlie McAvoy’s broken stick as a star of the game here, but we’ll settle for Bergeron.)

— Derek Forbort put the Bruins up with a perfectly executed shot over the glove of Matt Murray. The shot gave Boston a 2-1 lead at 10:58 of the second period.

— The Bruins’ top line saw another skater break a scoreless streak — this time it was Brad Marchand’s turn. He was waiting at the post to redirect a hard-hit shot from David Pastrnak past Matt Murray, tying the game on the power play at 5:12 of the second period.

This was Marchand’s first goal since Oct. 24, though he racked up seven assists through the five games in between.

WAGER WATCH
The Bruins were heavily favored in this one at -320, via DraftKings Sportsbook.

But bettors who expected the Senators to put up a fight could have cashed in, since they were +105 to cover the 1.5-point spread. Since they finished just one goal behind the Bruins, anyone who wagered a $100 bet would have taken home a $105 reward.

UP NEXT ON NESN
The Bruins will host the Edmonton Oilers on Thursday at 7 p.m. ET. You can watch all the action — including pre- and postgame coverage — live on NESN. 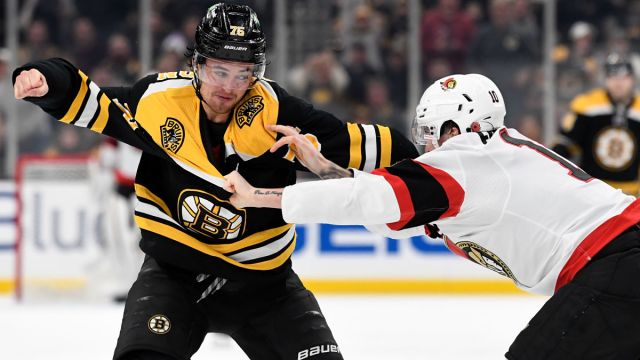 Jeremy Swayman Comes Through Big For Bruins In Win Vs. Senators