Jaylen Brown is back and the Boston Celtics couldn’t be more excited.

The 25-year-old guard returned to the court in Monday night’s lopsided win over the Houston Rockets after missing eight straight, and didn’t look like he’d missed a step finishing the night with 19 points in just 23 minutes.

After the game Celtics head coach Ime Udoka had nothing but praise for the young budding star.

“He looked good. Early in the game it looked like he took time to get warm and get up and down as much as he’s worked and rehabbed and played with some of the coaches and likewise it’s nothing like an actual game,” Udoka said. “It took a little bit of time, he got warm and then went on that flurry in the third quarter. So he said he still doesn’t feel normal but to have him back in that third quarter and see what he did was a great sign.”

Celtics center Al Horford also had praise for Brown in his return from a hamstring injury.

“It’s just good to have most of our guys healthy, Horford said. “It’s a big difference from Game One to now. We started a little sluggish there early but I felt like we got it going a little in the second, (Jayson Tatum) kind of carried us that first half and then in the third we really got it going and Jaylen got it going as well. That was good to see.”

Brown also gave an update on how he felt after his big return.

“It felt good to be back out there. Just being with my teammates and competing. I didn’t feel my best out there,” Brown said. “I felt good all the way going up to the game and then I had a little bit of tightness so we’ll see how I feel tomorrow and keep building.”

The Celtics are at their best when Brown and Tatum are in the lineup and they definitely looked strong Monday. Although they were playing the one-win Rockets, the return of Brown and Robert Williams to the starting lineup looked seamless. Dennis Schröder and Grant Williams’ return to bench roles helps shore up the second unit and it looks like the Celtics are turning a corner.

Boston has won seven of its last 10 games and now sit at 10-8 on the season ahead of its Wednesday night clash with the Brooklyn Nets. 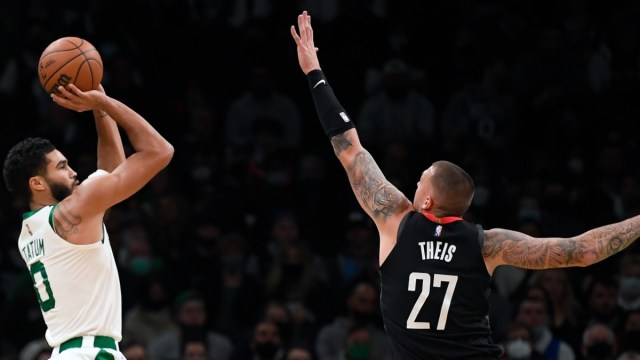