The Boston Bruins earned a one-sided win over the Buffalo Sabres on Wednesday, but it was a bit overshadowed by the late exit by star defenseman Charlie McAvoy.

McAvoy skated off the ice on his own power, but did exit for the locker room and would not return.

Cassidy said McAvoy got stitches, but explained he was going to be fine. He even added how McAvoy, as long as he continues to feel OK, could be back in the lineup when the Bruins face the New York Rangers on Friday.

“He got some stitches. He was up moving around so he’s good,” Cassidy said, as seen on NESN’s postgame coverage. “I don’t expect much going on. He’ll have a gash over his eye. Hopefully no (concussion). ? Right now that’s not the case, but who knows. Let’s hope he wakes up, knock on wood, healthy and feeling good, has some turkey tomorrow, and ready to go Friday.”

Cassidy further acknowledged how he did not have any problem with the hit by Girgensons.

“I don’t think so. I honestly think when players turn like that, and you’re kind of committed to a hit, it’s tough to take yourself out of that,” Cassidy said. “I don’t know what the exact rule is for the call. I know that if it was our player, hitting a guy like that, I’d say ‘Boy, he’s in a tough spot. He’s just trying to finish his check.’ But at the end of the day, I know they’re trying to get those hits out. But I’m not, I can’t fault Girgensons. I don’t think there was any malicious intent, personally.”

The Bruins return to the ice Friday at TD Garden against the New York Rangers looking for a second straight win.

Jeremy Swayman Turns It Around In Bruins Dominant Win Vs. Sabres 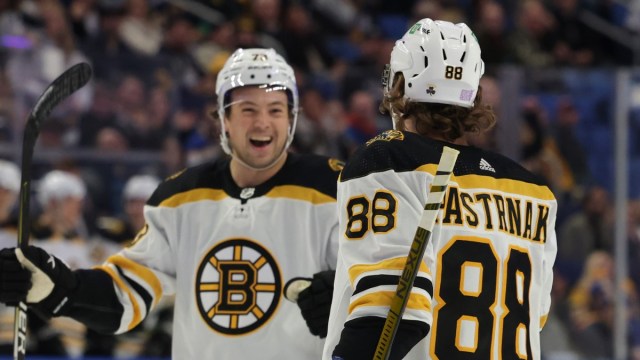