Patriots Mailbag: Who Is New England's Most Improved Returning Player? Skip to content

With the New England Patriots in Atlanta to face the Falcons on Thursday night, we’re bringing you this week’s mailbag one day early.

Consider this your pregame reading. Let’s get into it:

@BThomps81
Is there a chance the team will move Trent Brown to LT?
There’s always a chance, but I don’t think that’s likely unless Isaiah Wynn gets hurt or starts to really struggle. (He’s actually been pretty good of late.) Brown was a beast on the right side in his first game back, so I think the Patriots’ O-line is in good shape as is. He did say he still takes occasional reps at left tackle, though, to “stay polished.”

It will be interesting to see how the Patriots handle their overall offensive line moving forward. Josh McDaniels said Mike Onwenu wasn’t in the starting lineup last week because they wanted to use him to spell Brown as he worked his way back from his calf injury. Does that mean Onwenu will be back at left guard — his position for the first several weeks of the season — once Brown is ready for a full workload? Ted Karras has played very well in that spot over the last month or so.

McDaniels said Onwenu, the Patriots’ talented 2020 sixth-rounder, “obviously will be a factor for us as we go forward.”

@patscap
Out of all the players who played for the Patriots in 2020 who is your choice for most improved player?
Great question. The first player who comes to mind is Ja’Whaun Bentley, who’s impressed as an attacking inside linebacker this season. I thought Bentley looked out of his depth last season when he was asked to replace Dont’a Hightower, but he’s made a ton of plays at or near the line of scrimmage through 10 weeks. He has five tackles for loss. He had six in his first three NFL seasons combined.

Bentley is the type of bigger, slower linebacker who won’t be a fit in every system, but he’s made himself some money this season as he prepares to hit free agency for the first time.

I’ll give an honorable mention to slot corner Myles Bryant. His play has really softened the blow of Jonathan Jones’ season-ending shoulder injury.

@BrundenG
Does Rhamondre take carries from Damian Harris moving forward?
I wouldn’t be surprised if the rookie starts to eat into Harris’ workload a bit. Harris has been great as a rusher this season and should remain as the Patriots’ lead back when healthy, but Stevenson’s dual-threat potential adds an element of unpredictability to their offense when he’s on the field. Stevenson also has looked awesome in these last two games, becoming just the second Patriots rookie running back in the Belichick era (along with Sony Michel) to top 100 yards from scrimmage in back-to-back weeks.

Predicting the Patriots’ running back rotation has confounded fantasy players for years, but Stevenson deserves at least a dozen or so touches per game.

@snowbowl18
Do you see Uche carving out a regular role, and if so, in what capacity?
If he does, it won’t be for another month or so. The Patriots placed Josh Uche on injured reserve Wednesday, sidelining him for at least the next three games. I was fully expecting a breakout year from the second-year pro — he looked that good in the spring and summer — but that just hasn’t happened.

Over his last seven games, Uche has six tackles, no sacks, no tackles for loss, one quarterback hit and seven total pressures in 112 pass-rush snaps, per Pro Football Focus. He’s been one of the few disappointments in a defense that’s firmly established itself as one of the NFL’s best in recent weeks.

@34_colin
Is Kendrick Bourne the go to option in the offense now asides from Hunter Henry?
I’d still give that title to Jakobi Meyers, though it did surprise me to find out Bourne actually has one more reception (15 to 14) and a significantly higher catch rate (78.9% to 58.3%) than Meyers during the Patriots’ four-game winning streak despite seeing far less playing time. He also has 101 more receiving yards during that span, though his two longest gains (46 yards against the Jets and 48 yards against the Browns) both came in garbage time.

Though he’s had a few ball-security hiccups, Bourne has proven to be a great addition. He’s on pace for career highs in catches, receiving yards, catch rate and yards per target while playing as New England’s No. 3 receiver behind Meyers and the underwhelming Nelson Agholor.

Last week, Bourne was fourth in snaps behind de facto run-blocking specialist N’Keal Harry and still led all Patriots in yards from scrimmage (98 receiving, 43 rushing). And his touchdown was arguably the best throw and catch of this Patriots season.

@CitizenBane99
How many injured players can come off the injured list?
@CljFun
Can Jamie Collins return from IR?
I’ll handle these two together. The NFL last season lifted the cap on the number of players who can return from injured reserve from each team (it previously was two) and shortened the required timetable from eight weeks to three.

So, because Collins was placed on injured reserve before last week’s game, he must sit out two additional games before being eligible to return in Week 13 against Buffalo. He could be sidelined for longer if his injury — the severity of which has not been reported — has not healed by then.

@sebbehn
Are the past 4 games a good enough indication that this team can compete with or catch Buffalo?
Short answer: yes. I think the Patriots winning the AFC East is a realistic possibility, which is kind of crazy given where this team was a month ago. I’d still view the Bills as the favorites, but if the Patriots can even split their two head-to-head matchups in Week 13 and 16, they should be in striking distance as the season winds down. At the moment, they’re a half-game back of Buffalo.

@dpn_ray
When will Julian Edelman come out of retirement and rejoin the Patriots?
Former Patriots wideout Deion Branch floated that possibility during a recent CBS Sports Radio appearance:

But I just can’t see it. Edelman looked like a shell of himself during the first half of last season, and he’s said he has no desire to play if he can’t play the way he wants to. I think his knees are too far gone for him ever to get back to that point.

The Patriots could use him, though. As productive as Meyers has been in his old role — and some of his third-down catches over the middle have been Edelman-esque — he doesn’t possess Edelman’s elite, cut-on-a-dime quickness.

@TeamCrazyMatt
You get a chance to redesign the Patriots’ uniforms. What changes do you make?
Definitely add a secondary pants option. These current unis would look a lot less bland if they could mix in white, red or gray bottoms rather than going all blue, all the time. I’ve also been advocating for Bledsoe Blue alternates for years, so those would definitely be included in my new rotation.

The good news is the NFL is retiring its dumb one-helmet rule after this season, and the Patriots have all but confirmed their popular red throwbacks will be making a return in 2022. I’d also like to see a white version of those, which would be slightly different from the AFC 50th anniversary ones they wore in 2009. 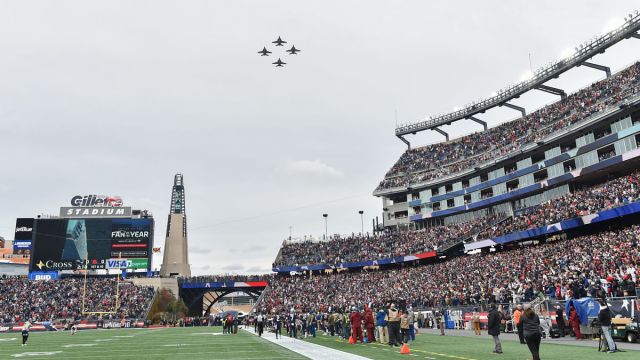 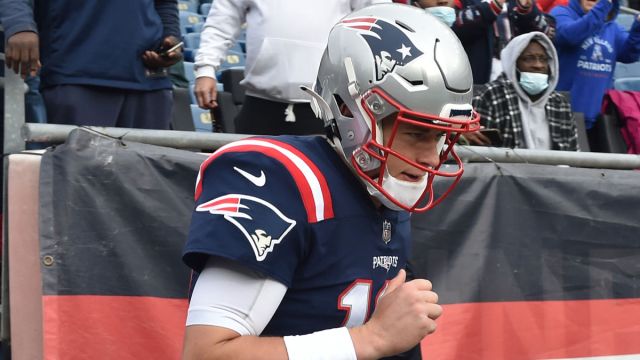