Patriots Takeaways: Six Things We Learned From Win Over Panthers Skip to content

The New England Patriots dispatched the Carolina Panthers on Sunday, winning 24-6 at Bank of America Stadium. Here are six things we learned in that Week 9 matchup:

1. An AFC East title is within the Patriots’ reach
That was the biggest takeaway from Sunday after the Patriots beat down the Panthers and the Jacksonville Jaguars pulled off a shocking upset of the Buffalo Bills. Viewed as prohibitive divisional favorites since before the season began, the 5-3 Bills now lead the 5-4 Patriots by just a half-game in the AFC East standings with two games between these longtime rivals still to come (Weeks 13 and 16).

Very little separates the conference’s third seed from its 11th, though. A total of eight AFC teams have exactly five wins. That number could grow to nine if the Pittsburgh Steelers win Monday night. Included in that group of playoff hopefuls are the Patriots, the Bills and the Cleveland Browns, who will visit Gillette Stadium this Sunday in a game that could have major postseason implications.

2. The Patriots are built to play bully ball
With Carolina boasting one of the NFL’s top pass defenses, the Patriots clearly planned to lean on their ground game in this one. That proved to be an effective strategy. New England rushed for a season-high 151 yards, with running backs Rhamondre Stevenson (62 yards), Brandon Bolden (54 yards) and Damien Harris (30 yards, touchdown) all contributing. It was tough sledding for Harris outside of his second-quarter touchdown, but Stevenson and Bolden each averaged more than 6 yards per carry.

It’s hard to draw any sweeping conclusions about the Patriots’ passing attack from this game, as Mac Jones attempted a career-low 18 passes and just five after halftime. That won’t be the case every week — Jones has thrown 30-plus passes in seven of his first nine NFL starts — but this offense is at its best when the run game is humming. The Patriots have rushed for 148, 142 and 151 yards during their current three-game win streak.

Injuries could complicate this plan, though, as neither Harris nor Stevenson was able to finish Sunday’s game. Their statuses will be closely monitored this week.

3. The Patriots still are Sam Darnold’s daddy
This was a very, dare we say, Jets-ian performance by the former New York quarterback. Darnold, who was limited by head and shoulder injuries last week, once again was terrible against New England’s defense, completing 48.5 percent of his passes and tossing three interceptions, including a pick-six.

Darnold has faced the Patriots four times in his career. In those games, he’s 0-4 with one touchdown pass and nine interceptions.

Almost all of Carolina’s positive offensive plays came courtesy of superstar running back Christian McCaffrey, who finished with 52 rushing yards and 54 receiving yards in his first appearance since Week 3. Nearly 70 percent of Darnold’s 172 passing yards came on throws to running backs.

4. This is a winning defense
Since being shredded by the Dallas Cowboys in Week 6, the Patriots have allowed just five touchdowns over three games. They’ve surrendered more than 24 points just twice this season. They’ve generated 10 turnovers over their last four games after forcing just one over the previous three.

Cornerback J.C. Jackson was one of several standout performers Sunday, intercepting two Darnold passes and returning one 88 yards for a touchdown. The Patriots’ active front seven also overwhelmed an injury-depleted Panthers O-line and hounded Darnold throughout the afternoon, with sack leader Matt Judon and stud rookie Christian Barmore leading that charge. (An upbeat Belichick raved about both Jackson and Barmore in his postgame news conference.)

The Panthers didn’t gain more than 12 yards on any first-half drive. They moved the ball more effectively after halftime but ended three consecutive drives with interceptions. Once the Patriots took a 21-6 lead on Jackson’s pick-six, the game was effectively over with more than 20 minutes still to play.

Great defense, power rushing and timely plays by their young quarterback — that’s the blueprint for success for the 2021 Patriots.

5. J.C. Jackson is setting himself up for a massive raise
Has Jackson been the same type of lockdown corner that Stephon Gilmore was for New England in 2018 and 2019? No. He hasn’t yet proven he can consistently erase elite receivers the way Gilmore could at the peak of his powers. He might never reach that level. But Jackson’s interception numbers alone should earn him a sizable pay raise this offseason.

Jackson, who missed two practices last week because he was “sick as (expletive),” now has an NFL-best 22 career picks since he entered the league in 2018. Miami’s Xavien Howard, a first-team All-Pro last season, ranks second with 20. Jackson’s five interceptions this season are tied for second-most in the NFL behind Dallas’ Trevon Diggs, who has seven.

As part of a relatively weak free agent class for cornerbacks, Jackson is poised to cash in after playing on a $3.4 million RFA tender this season. The big question is whether the Patriots will be the ones to pay him.

6. There’s still a lingering lack of discipline
Of the six penalties New England committed Sunday, five were pre-snap fouls. Isaiah Wynn, Hunter Henry and Jakobi Meyers all were flagged for false starts, with Wynn’s and Henry’s coming on the Patriots’ first and second drive, respectively. The Patriots also had two delay of game penalties, including one on the opening play of a possession.

Beyond the flags, Jones turned the ball over twice, losing a fumble on a strip sack and throwing an easy interception to Gilmore. The Patriots have displayed some uncharacteristically shaky ball security this season, coughing up multiple giveaways in six of their first nine games. They hadn’t had six multi-turnover games in any full season since 2009.

Lately, the Pats have been able to overcome these miscues, but they’re putting themselves in less-than-favorable positions. 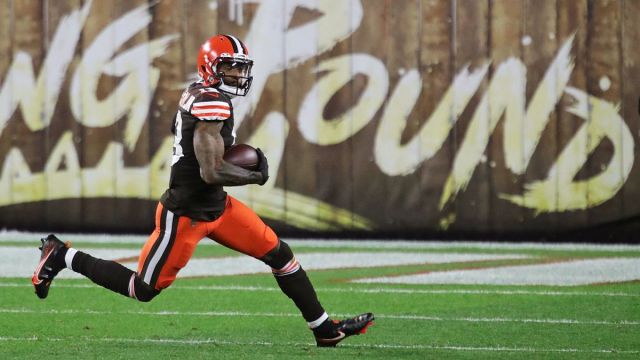 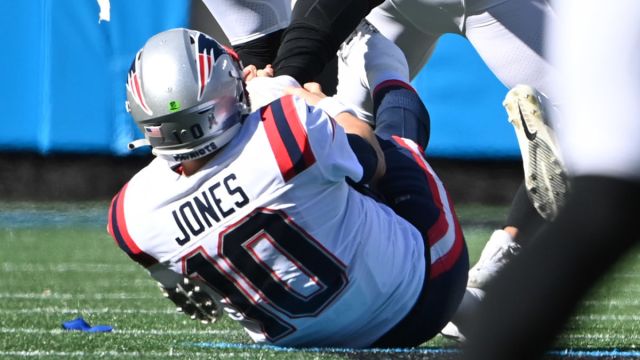