Chaim Bloom might have tipped his hand on how the Red Sox plan to address their starting rotation this offseason.

Boston’s chief baseball officer has at least one hole to fill in the starting rotation after Eduardo Rodriguez darted for Detroit. Bloom said Wednesday it’s an ongoing process, and the Sox aren’t necessarily focused on “famous” hurlers.

It was an interesting comment and an eye-opening admission that is probably a needed reminder to take everything with a grain of salt during hot stove season. The Red Sox, according to reports, were in on both Noah Syndergaard and Justin Verlander before the big-name right-handers signed with the Angels and Astros, respectively.

Bloom also said they wouldn’t completely rule it out, which could leave the door open for a free agent signing for someone like Marcus Stroman, but what about the trade market? Additional starting pitching depth can come from a variety of places, and that includes striking deals with rebuilding clubs looking to unload cost-controlled players in exchange for prospects. Boston has rebuilt its farm system to the point where Bloom likely feels more comfortable parting with those coveted young players in order to address a need like in the rotation.

If they go that route, which pitchers might they pinpoint? We’ve got a few options below.

Sean Manaea, Oakland Athletics: The A’s are reportedly open for business or at least open to stripping it down yet again. If that’s the case, the Red Sox very much should be making calls on any number of A’s starting pitchers. Manaea might have the highest upside, having flashed brilliance at various points in his career. The Red Sox got an up-close look at his potential when he no-hit them in 2018. One thing to really like about Manaea is how he takes the ball every turn, leading the big leagues in starts last season with a pair of complete games. He’s under contract for at least one more year, too. Really, any Oakland starter could be worth exploring, including Chris Bassitt and Frankie Montas.

Sonny Gray, Cincinnati Reds: Like the A’s, the Reds are thought to be ready to sell off parts, and Gray — an established, veteran big league starter — has to be enticing for buyers. Gray has been fantastic with the Reds, posting a 136 ERA+ in Cincinnati and that includes a top-10 finish in Cy Young Award voting in 2019. He might be better suited staying in the National League, as his miserable 2018 campaign with the Yankees sure stands out. The contract is attractive, though: Gray is owed just over $10 million for 2022 with a team option for 2023 at $12 million.

Kyle Hendricks, Chicago Cubs: Again, we just saw the importance of logging innings as workhorse Robbie Ray won the American League Cy Young. Hendricks isn’t going to win any awards, but he has a remarkable ability to take the ball. A rotational cog for those great Cubs teams, he logged at least 177 innings in six of the last eight seasons, which includes the COVID-shortened 2020 season where he logged more than six innings per start. He had a real tough 2021 season, allowing a league-high 200 hits, so maybe the signs of regression are there. If a team like the Red Sox likes him, though, he’s under contract for at least two more seasons. He turns 32 in December.

German Marquez, Colorado Rockies: It’s a bit of a long shot, sure. Marquez turns 27 in February and is coming off a pretty solid 2021 season, so he’s essentially in the prime of his career. He, too, brings roster control, signed through at least 2023 with a team option that becomes mutual with a top-three Cy Young finish, in which case you’d be more than happy to pay him $16 million in his age-29 season. Stop us if you’ve heard this before, but he logs big innings. He led the league in innings pitched in 2020 and has logged at least 162 frames in each of his four full, non-COVID seasons. His career 115 ERA+ paints the picture of a pitcher who has been slightly better than league average who probably has even more room to grow ? especially if you get him out of Coors Field. Of course, the Rockies know this, too, and trading arguably their best asset right now might not be the best move. But if the Rockies think they’re still a long way from contention, it might make sense to cash in with their pick of prospects from a team like the Sox.

Josh Hader, Milwaukee Brewers: There’s probably not a match here, but Bloom keeps talking about how they need to be open to everything. What a Brewers-Red Sox trade centered around Hader would entail is tough to predict, but acquiring a talent like Hader would certainly lead to an interesting bullpen overhaul. His numbers against right-handed hitters were practically equal to what he did against lefties, which is good for a team that faces the likes of Aaron Judge and Vladimir Guerrero Jr. The Brewers reportedly aren’t actively looking to trade him, but they’re also willing to listen. There are probably too many hurdles to clear, but this would be an intriguing outside-the-box idea. 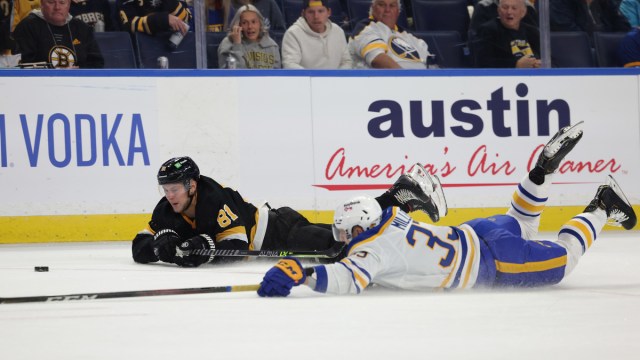