Rhamondre Stevenson is the biggest member of the New England Patriots’ running back stable. But he’s not that big.

Stevenson was up in the 240s at times during his college career at Oklahoma, but he made an effort to drop weight before the 2021 NFL Draft. He weighed in at 231 pounds at his pre-draft pro day.

“Just dietary changes,” said Stevenson, a fourth-round pick. “Just working harder. It wasn?t that hard, to be honest. Once I realized I had to lose weight, it happened as soon as I wanted it to happen. It was just little changes to diet and workouts, things like that.”

More changes were necessary after Stevenson arrived for his first NFL training camp and failed his conditioning test. Early in camp, Patriots running backs coach Ivan Fears was asked what Stevenson needed to improve. His response: “Everything.”

Stevenson posted gaudy numbers during the preseason but integrated slowly once the regular season began, sitting out three of New England’s first four games and four of their first seven as a healthy scratch. But he gained a foothold on the Patriots’ gameday roster in Week 8 and hasn’t looked back.

The 23-year-old has surpassed 100 yards from scrimmage in each of his last two games, becoming just the second Patriots rookie running back in the Belichick era to do so (Sony Michel, 2018). On Sunday, he started in place of injured lead back Damien Harris and, despite sitting out all three practices during the week as he recovered from a concussion, ran for 100 yards and two touchdowns on 20 carries in a 45-7 rout of the Cleveland Browns.

Stevenson forced five missed tackles and had 62 yards after contact against Cleveland, per Pro Football Focus. He runs with eye-popping power — he’s listed LeGarrette Blount among his influences — but also has receiving chops, catching 11 passes on 13 targets for 111 yards in six games this season.

“I think what makes it unique is I like a lot of different running backs,” Stevenson said. “I like guys that are even 5-foot-8, and then I like the bigger backs, too. So I just really try to take bits and pieces from everybody’s game and just try to implement them into my own. … I just think my running style is versatile, I would say. What I’m thinking when I have the ball is just that I can never let the first person tackle me. Just get as much positive yards as possible, nothing negative.”

With Harris seemingly still in concussion protocol as of Monday, Stevenson could play another starring role Thursday night against the Atlanta Falcons. 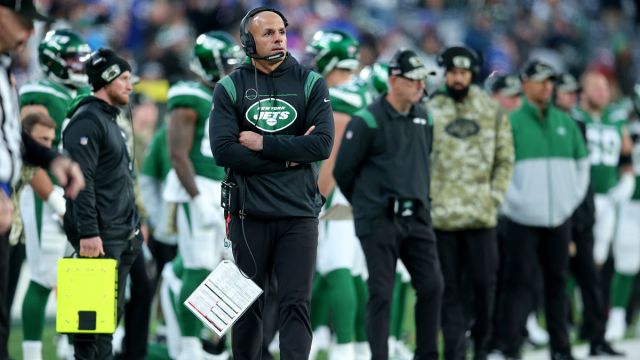