These Advanced Stats Indicate How Mac Jones Excelled In Win Vs. Titans Skip to content

New England Patriots quarterback Mac Jones had a good-not-great performance in a Week 12 victory over the Tennessee Titans at Gillette Stadium on Sunday.

But the rookie signal-caller did have a noteworthy day when it came to a few specific aspects of his game. One of which was his production with play-action passes.

Jones completed 23 of 32 passes for a season-high 310 yards and two touchdowns, both of which went to wide receiver Kendrick Bourne. He did not throw an interception and his 123.2 passer rating was the second-highest of the season.

Another area of strength for Jones on Sunday was his ability to complete several long passes.

Jones’ six passes of 20 or more yards tied him for the Week 12 league leader along with Las Vegas Raiders quarterback Derek Carr, according to SportRadar. SportsRadar also had Jones for a 50% completion rate on passes of 20 or more air yards, which tied him for fourth behind Zach Wilson, Josh Allen and Dak Prescott, although Jones threw eight of such passes where Allen and Prescott threw six and Wilson threw just three.

“First thing is offensive line, playing really well and we feel confident in doing that, and I don’t think I got hit today but maybe one time, and that was a talented defensive front,” Jones responded when asked what led to the performance from the passing game. “So, props to them just to allow us to open up a little bit but there’s more opportunities to be made, and like I said, it starts with the front and then the guys getting open. They have done a good job of that all year and it’s just getting the ball in tried and throwing it to the right guy. We’ve just got to continue to improve on that.”

It is worth noting, though, that neither Jones nor the Patriots were opportunistic when they advanced to the red area. New England was 2-for-5 in red zone production.

Jones and the Patriots now have won six straight games and await an AFC East showdown with the Buffalo Bills on “Monday Night Football” in Week 13. 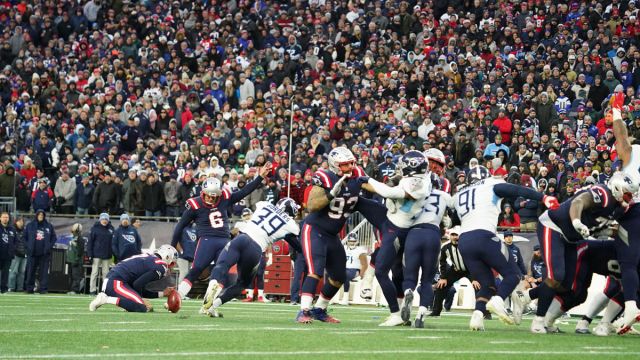