Jakobi Meyers had to wait until his 39th NFL game to catch his first professional touchdown.

Kendrick Bourne believes the third-year Patriots wide receiver won’t have to wait very long to haul in his second.

Meyers’ historic touchdown drought came to an end Sunday in New England’s demolition of the Cleveland Browns at Gillette Stadium. The 2019 undrafted free agent corraled a fourth-quarter pass from backup quarterback Brian Hoyer along the sideline, broke a tackle and dashed 12 yards into the end zone. Meyers immediately was swarmed by his Patriots teammates, who were fired up to see the college quarterback-turned-receiver finally put up six.

And now that Meyers has that long-awaited touchdown checked off, Bourne believes his fellow Patriots wideout is about to become an end zone merchant.

“I think it was just the highlight of the game,” Bourne told reporters, per a team-provided transcript. “How it was all going and, then, to end that way with him getting his first, congrats to my guy. He’s been working so hard. He works hard every day and he deserves it. I told him he might go on a touchdown streak now. It was just dope for him breaking the tackle too and then making the play, but again, shoutout to the whole team executing on the play to make the play happen. It takes everybody.”

Meyers’ next opportunity to log a TD will be Thursday night when New England visits the Atlanta Falcons. Scoring at Mercedes Benz Stadium surely would mean a little extra to the Georgia native. 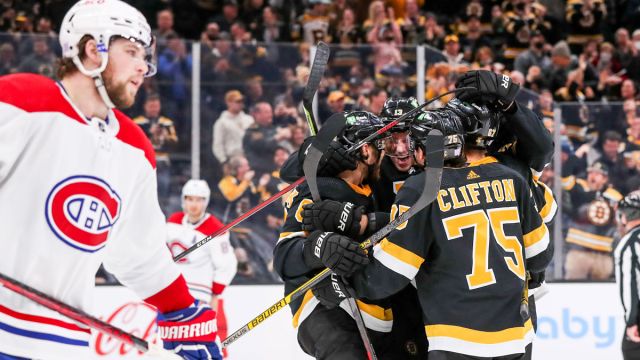