Boston Bruins top-line winger Brad Marchand returned from a three-game suspension Wednesday against the Vancouver Canucks, and it caused Taylor Hall to drop from the first to the second group alongside Charlie Coyle and Craig Smith.

That, however, lasted just two periods as Boston’s second line did not register a shot through the opening 40 minutes in Wednesday’s 2-1 shootout loss to the Canucks.

Bruins acting head coach Joe Sacco called on Erik Haula to move from the third line to the second (where he was when Hall was on the top line) for the final period. Sacco explained the decision after the game.

“Well, they didn’t have any shots on net so we just thought, you know, we’re trying to get to Haula back there and generate, that line was playing well in the last couple games just to change it up, obviously,” Sacco said after the game, as seen on NESN’s postgame coverage. “We needed to do something from the offensive side of our group.”

Sacco, though, didn’t want to put all the blame on Hall for not producing. Still, it’s fair to think Haula could find himself with Coyle and Smith when Boston returns to the ice Thursday in Edmonton.

“Well, it wasn’t necessarily just him. I mean, it was the line in general,” Sacco said. “I thought that, we thought as a group that maybe we could just change it up a little bit and put Haula because that line did have some success the last couple games. So we’ll figure out where we want to go with tomorrow as far our lines, but we just thought we’d give it a chance and give it a shot in the arm and try to jolt our offense a little bit.”

Here are some other notes from Bruins-Canucks:

— Marchand recorded four shots and looked like his usual self in his return from the three-game suspension.

“He played a lot, he probably played too much, probably had him out there little too much tonight, but we got the three power plays in the third and the overtime,” Sacco said of Marchand. “But you know, I think his game is fine. He always works hard. He’s generating. I’m fine with (Marchand’s) game tonight. I thought he was good.”

— Jeremy Swayman kept Boston in it with another strong game between the pipes. Swayman finished with 31 saves on 32 shots including three stops in overtime to force a shootout.

— Patrice Bergeron scored the game-tying goal for the Bruins that essentially earned them one point with the overtime result. Bergeron’s goal came on a 5-on-3 power play as he deflected a shot from David Pastrnak.

“Obviously, Pasta’s got that shot where you need to be in the shooting lanes so I think it usually opens up a little bit of a passing lane for a shot-tip, especially 5-on-3, and we tried to use that to our advantage most often than not,” Bergeron said, as seen on NESN. “We talked about it before the faceoff on that play that it should be there.”

— The Bruins travel to the Edmonton Oilers on Thursday for the second night of the back-to-back. Puck drop is set for 9 p.m. ET, and you can watch pregame coverage on NESN starting at 8 p.m. 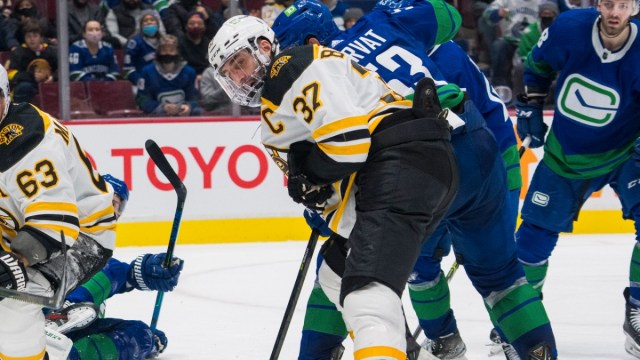