Mac Jones posted career lows in all of those categories Sunday as the New England Patriots fell to the Buffalo Bills 33-21 at Gillette Stadium.

The rookie quarterback’s performance wasn’t the primary reason for New England’s defeat, and he did improve after halftime as the Patriots mounted a late comeback bid. But it was, on the whole, an ignominious passing performance for the Offensive Rookie of the Year front-runner.

Jones completed 14 of 32 passes for 145 yards and no touchdowns with two interceptions in the loss. His 31.2 passer rating was more than 20 points worse than his previous low (55.2 vs. New Orleans in Week 3), and his yards-per-attempt average (4.5) dipped below 5 for the first time.

Afterward, the 23-year-old placed the blame for New England’s offensive issues on himself.

“I think we just need to execute better,” Jones said in his postgame news conference. “It really just wasn’t our day. But there’s no excuses, and there’s really nothing to talk about. I didn’t play great. I can play better, and I can lead a lot better. It starts with me, so we’ll just have to look in the mirror and address what we can and just keep working to get better every day.”

Outside of one long touchdown drive powered by running back Damien Harris (108 yards, three touchdowns), the Patriots were unable to move the ball in the first half. They gained fewer than 15 yards on four of their first five possessions, including a three-and-out to open the game, and one of their two first downs on those drives came via a roughing the passer penalty.

The Bills scored a touchdown on their first possession and never trailed, reaching the red zone on all seven of their non-kneeldown drives.

“I think (it’s about) just executing better, just whatever the play call is, go out there and do your job,” said Jones, who also struggled early in last week’s loss to the Indianapolis Colts. “I didn’t do that early on in the game, I didn’t do it throughout the game. You can’t have successful plays when your quarterback’s not doing the right thing, so I have to play better and get the ball to the people that need to get the ball. There’s no excuses.”

The Patriots were uncharacteristically aggressive on fourth down Sunday, and they had success in those gotta-have-it situations, going 5-for-6. They were a miserable 1-for-10 on third down, however, and Jones was not pleased with their early-down execution, either.

“We didn’t execute,” Jones said. “I didn’t execute. Some of those plays shouldn’t even have been there. We should have skipped some fourth downs and third downs. First and second downs we could have had bigger plays from me.

“Those are the plays you want to make, and we did a good job making some of them. But we really don’t even want to be in that spot. Every time it puts (offensive coordinator) Josh (McDaniels) in a hard position and it puts a lot of the other players in a hard position, too.”

Accuracy is a hallmark of Jones’ game, but he was usually erratic against Buffalo, completing less than 50% of his passes for the first time in his young career. At least two of his passes were dropped by Patriots pass-catchers, but on several others, he simply missed.

The Patriots were shorthanded at wide receiver Sunday with starter Nelson Agholor sidelined with a concussion. Kendrick Bourne was able to return from the reserve/COVID-19 list after not practicing all week, but he finished with just two catches on four targets for 33 yards. Jakobi Meyers was characteristically reliable (eight targets, six catches, 59 yards), but his teammates combined for just eight total receptions, with none recording more than two.

“Getting KB back was great,” Jones said. “He came out here with the right attitude. All the receivers fought hard. But I’ve got to give them the ball, let them run with it and make their plays. It’s hard to make any plays when the ball is not in the frame to catch. That’s on me, and we’ll just try to get everyone back next week and continue to work.”

Jones will look to rebound next Sunday when he squares off against fellow rookie Trevor Lawrence and the Jacksonville Jaguars in what has become a must-win game for New England. 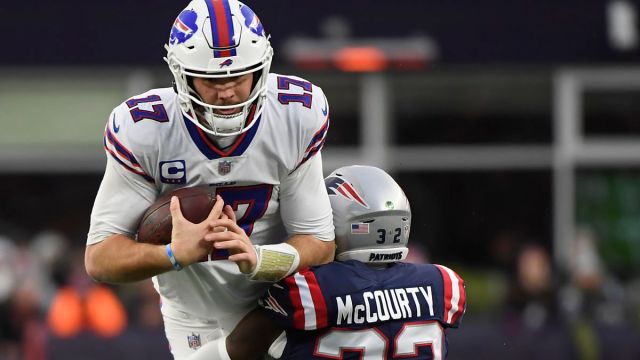