Boston Bruins winger Brad Marchand put on quite the show Wednesday night, scoring two of his three goals with 15 seconds and following up his hat trick tally with a celebration that included picking up one of the hats thrown onto the ice at TD Garden.

Marchand acknowledged how the one he chose — a hot pink cowboy hat — was a no brainer for his collection after recording his fifth career hat trick. That celebration, picking up a hat after a player scores a hat-trick goal, has become a fixture in the locker room. Marchand shared how now he’ll sign and date the lid before keeping it in the Bruins dressing room.

“I mean, the hat speaks for itself,” Marchand said during a video conference after Boston’s 5-1 win over the Montreal Canadiens. “It just has sexy written all over it.”

Marchand certainly is well-deserving of the sparkling souvenir as the hat-trick goal marked his eighth in the last four games. He has nine points during that stretch, as well.

Here are more takeaways from Bruins-Canadiens on Wednesday:

— Bruins defenseman John Moore exited Wednesday’s game entering the third period after absorbing a hit from behind and into the glass by Canadiens’ Michael Pezzetta. It was one of two questionable hits by Pezzetta in the game.

“We thought the hit was late on Johnny Moore, first of all, probably unnecessary. Refs didn’t see it that way, who knows how it’ll look,” Cassidy said. “But whatever the case is, it’s the same player initiating contact in vulnerable spots so, you know, we’re going to push back. And we did. Good for our guys.”

— It looked as it Bruins defenseman Urho Vaakanainen, 23, scored his first career goal with a third-period tally at 10:19. That goal, however, was later credited to Curtis Lazar, according to the Bruins, with Vaakanainen and Anton Blidh earning the assists.

Vaakanainen would have been the 17th different Bruins player to score since Jan. 1, but Boston now remains at a noteworthy 16 in the last seven games.

— Cassidy was asked if he ever considered putting Tuukka Rask in the game with Boston possessing a four-goal lead late in the contest. Cassidy said he did not think about it given that Rask would be coming off the bench cold, especially since he hasn’t played this season.

Cassidy did reveal the Bruins locker room has been provided a jolt with Rask’s return. Rask is set to start between the posts Thursday at TD Garden.

“So, yeah, I do believe there is a certain electricity, a certain buzz,” Cassidy said. “We feel he’s going to make us better at that position. That’s why the decision was made. We’re happy to have him. Let’s go.”

— Patrice Bergeron stuck up for teammate Matt Grezlyck after the defenseman was on the opposite end of (another) hit by Pezzetta that Boston didn’t like. Bergeron’s willingness to do so stuck out to everyone on the bench, according to Cassidy.

“Oh, absolutely. And trust me when these hits happen, Bergy’s not on the ice. He points it out on the bench right away, ‘We finish every check,’ ” Cassidy recited. “He doesn’t get up and say ‘We got to kill this guy.’ We just got to finish every check. We got to respond, push back, whatever words you want to use. And let them know that we’re not going to take that whether it’s in our building or your building.”

— The Bruins return to TD Garden for their second of seven consecutive home games Thursday while hosting the Philadelphia Flyers. 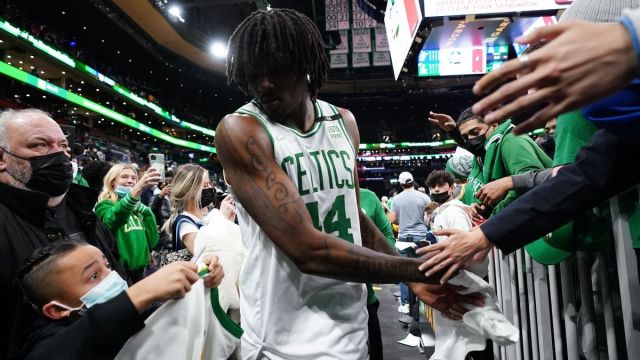 Rob Williams Returned To Celtics-Pacers Despite Getting Stitches Mid-Game 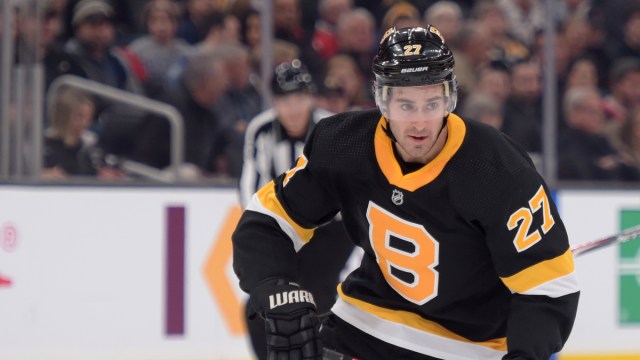