The San Francisco 49ers are on to the divisional round after defeating the Dallas Cowboys in a wild-card game on Sunday. But they apparently will be dealing with an injured Jimmy Garoppolo in the lead-up to their game against the Super Bowl-favorite Green Bay Packers.

Head coach Kyle Shanahan on Monday told reporters Garoppolo — who was playing with a torn ligament in the thumb of his throwing hand — suffered a “slightly” sprained right shoulder in the second quarter of the win.

“He should be fine for practice,” Shanahan said, via Nick Wagoner of ESPN. “He had to play through some pain and stuff, but he ended up checking out all right. Just a slight shoulder sprain and he should be good for (Tuesday’s) practice.”

Garoppolo threw for 172 yards with an interception and did not have a touchdown pass, completing 16 of 25 attempts. Both 49ers touchdowns came on rushes, one from Eli Mitchell and another from Deebo Samuel.

San Francisco got quite banged up in the win, with linebacker Fred Warner suffering a low ankle sprain (which originally appeared to be much worse), defensive end Nick Bosa getting ruled out with a concussion and defensive end Jordan Willis enduring a high ankle sprain. 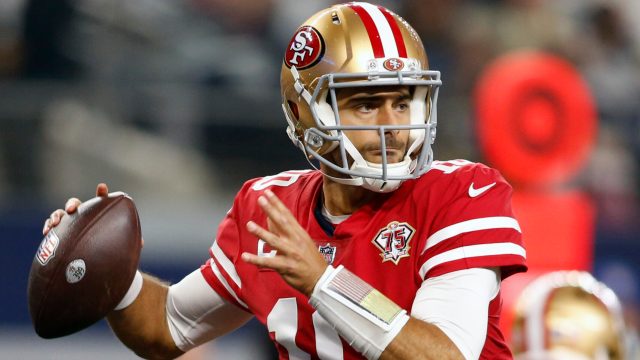 Jimmy Garoppolo is experiencing a slight sprain in his throwing shoulder