After each New England Patriots game this season, we shared a collection of in-the-moment thoughts on Mac Jones’ latest performance.

Here’s what we learned from the rookie quarterback during his maiden voyage in New England (advanced stats via Pro Football Focus, Football Outsiders and rbsdm.com):

1. Accuracy and NFL readiness were two of Jones’ most desirable traits entering the 2021 NFL Draft, and both of those translated to the pro level. He won the starting job from Cam Newton in training camp and played every meaningful snap for the Patriots in the regular and postseason, with backup Brian Hoyer only appearing in garbage time in comfortable wins.

With Jones at the controls of a run-focused offense, the Patriots went 10-7 and returned to the playoffs after a one-year hiatus. They ranked fifth in the league in points per game, 14th in passing yards per game, eighth in yards per attempt and ninth in both offensive DVOA and pass offense DVOA.

As for accuracy, Jones’ 67.56% completion rate was the second-best ever by a first-year QB, narrowly trailing Dak Prescott’s 67.76% mark from 2016. He also ranked eighth in the NFL in completion percentage over expected, though he was 17th in adjusted completion percentage, which accounts for drops and throwaways, sandwiched between Tua Tagovailoa and Davis Mills.

“Mac, he’s throwing it hard, but when you catch it, it’s like a pillow, man,” wide receiver Kendrick Bourne said in October. “I don?t know. He’s special, man.”

If you exclude Lance, who attempted just 71 passes as Jimmy Garoppolo’s backup in San Francisco, Jones also was tops in passer rating, touchdown rate, yards per attempt and adjusted yards per attempt.

Between coaching, roster talent and organizational stability, Jones had a far better setup than most of his fellow 2021 draftees. It’s entirely possible that someone like Lawrence would have performed similarly or even better if he’d been drafted by the Patriots instead of the cellar-dwelling Jacksonville Jaguars. But those hypotheticals don’t diminish Jones’ performance.

3. Though Jones’ rookie season was, on the whole, a success, he slumped down the stretch, as did many of his Patriots teammates. He was far less accurate and more mistake-prone after New England’s Week 14 bye, dropping his completion percentage by 10 points and committing nearly as many turnovers over his final five starts (eight) as he did in his first 13 (10).

That late-season swoon featured Jones’ worst game as a pro to date, as he posted career lows in completion rate, yards per attempt and passer rating and threw two interceptions in a Week 16 loss to Buffalo. The Patriots dropped four of their final five games, and Jones committed multiple turnovers in all four losses.

Why did Jones suddenly begin struggling in mid-December? That’s still unclear. Perhaps the grind of his first NFL season — which is considerably longer and less forgiving than the college schedule — wore him down. Maybe it was the cold weather, which Jones hadn’t experienced in college at Alabama or as a Florida high schooler. Or opposing defenses wising up and doing a better job of taking away his preferred throws. Did the non-throwing-hand thumb injury, which prompted him to begin wearing a glove, have any effect?

Jones wasn’t the sole or even primary reason for New England’s nosedive, but he’ll need to take steps this offseason to ensure he’s at his best next December and January.

4. Turnovers became an issue for Jones late in the season, but overall, he did a great job of taking care of the football. Just 2.5% of his plays were deemed “turnover-worthy” by PFF.

How does that stack up against other starting quarterbacks? Only Justin Herbert, Tom Brady, Aaron Rodgers, Joe Burrow and Kyler Murray posted lower turnover-worthy play rates.

The Patriots, though, had difficulty overcoming Jones’ giveaways when they did occur. They were 1-6 when Jones turned the ball over multiple times and 9-2 when he didn’t.

5. One lingering issue Jones will need to clean up is his pre-snap execution. He earned praise for his command of Josh McDaniels’ complicated offense, but his six penalties this season were tied for third-most among NFL quarterbacks, per PFF, trailing only Jared Goff (nine) and Matthew Stafford (eight).

One of Jones’ penalties was for intentional grounding. The other five were pre-snap infractions: four delay of game calls and one false start. Some of those came in key spots, like Jones’ false start on fourth-and-1 in the Patriots’ Week 18 loss to Miami. Jones then was flagged for delay of game again in Saturday’s playoff loss, turning a third-and-15 into a third-and-20.

We’d put this in the “he’s young; he’ll learn” category.

6. Even amid his less-than-stellar closing stretch, Jones was one of the few bright spots in the 47-17 Buffalo butt-kicking that ended New England’s brief playoff run.

His two interceptions in that game — one of which was a superb defensive play by safety Micah Hyde — were costly. But he made athletic plays to convert multiple third-and-longs — he’s not nearly as statuesque as his pre-draft scouting reports suggested — and showed admirable fight as he led two late touchdown drives. Jones even threw an effective block to clear out 260-pound defensive end Mario Addison while the Patriots were trailing by 30.

Jones made mistakes in all of those games, but his second-half performances kept the Patriots competitive. Saturday’s ugly finale was the only true blowout loss New England suffered this season.

7. From an intangibles perspective, Jones quickly won over his veteran teammates and maintained their respect throughout the season.

Back in training camp, while his competition with Newton still was ongoing, leaders like Matthew Slater, Dont’a Hightower and Brian Hoyer were raving about Jones’ maturity, work ethic and football IQ. Since then, we’ve heard nothing but high praise for the 23-year-old, from players and coaches on both sides of the ball. That continued this week during the team’s end-of-season media availability.

Receiver Jakobi Meyers said he’s “very excited” about the heights New England can reach with Jones behind center. Left guard Ted Karras said Jones “is going to be a big part of this organization’s success for a long time.” Tight end Hunter Henry said he’s “really proud” of the rookie and “excited to have him as my quarterback.”

“I think the future is bright for this organization with that young man,” Slater said. “Not just his play on the field, but I think the man that he is, the character that he possesses. He’s the type of man that you hope to build around.”

For his part, Jones said he intends to take on a more prominent leadership role as he enters Year 2, signs of which already were evident in his postgame presser Saturday night.

“I think it just goes back to practice and holding everybody to a higher standard,” he told reporters in Buffalo. “I know that I’m a rookie or whatever, but I could have done a better job of just holding everybody to that standard, myself included. I think we’ll make a lot of progress in the offseason with that and my leadership and just being myself.”

8. The question now is what the Patriots can do to maximize Jones’ talents in the years to come. One suggestion: go get him a No. 1 wideout, whether it’s a top-tier slot tactician or a game-breaking outside threat.

That’s easier said than done, obviously, and New England’s passing game did make massive strides this season with Meyers, Bourne and Henry as its centerpieces. But look at what having a player like Stefon Diggs has done for Josh Allen, who was wildly inconsistent in his first two seasons. Or Keenan Allen with Herbert. Or Ja’Marr Chase with Burrow.

Nearly every team in this year’s NFL playoff field had at least one upper-echelon pass-catcher. The Patriots did not. Meyers and Bourne are very good players, but both are best suited for complementary roles. Henry was excellent in the red zone, but he ranked 16th among tight ends in catches and 12th in yards despite playing in every game.

For Jones to reach his potential as a passer — to be mentioned with the likes of Allen, Herbert and Burrow — the Patriots must continue to improve the talent around him, whether that means swinging a trade for someone like Calvin Ridley, seeking out an option in free agency or using an early-round draft pick on a wideout.

The Patriots again should field a strong ground game in 2022, but they do have some questions to answer on the offensive line, with Karras and right tackle Trent Brown set to hit free agency. With left tackle Isaiah Wynn also entering the final year of his rookie contract, don’t be surprised if New England targets a tackle early in this year’s draft.

There also was speculation that McDaniels could leave for a head-coaching job this offseason, but the Patriots’ offensive coordinator has yet to receive any publicly reported interview requests. 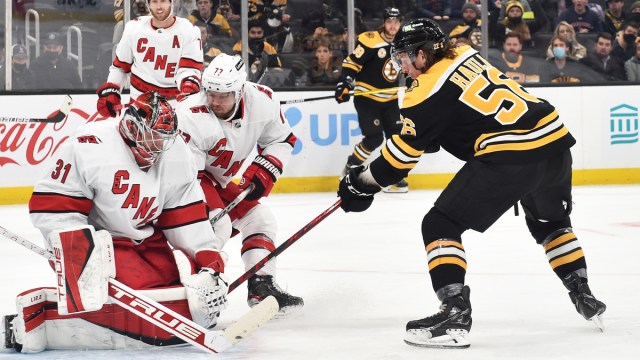 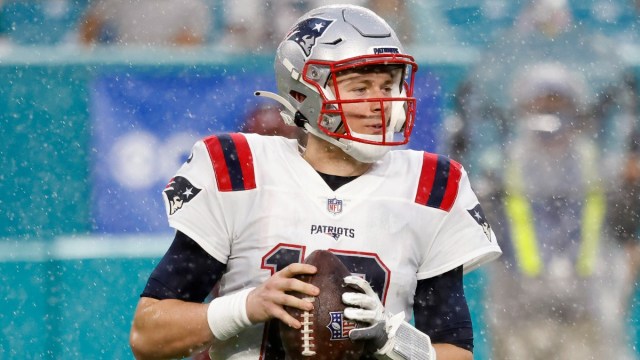