New England closed out the 2021 regular season with a 33-24 road loss to the Dolphins. It was a sloppy showing in all three phases from the Patriots, including quarterback Mac Jones, who led a fourth-quarter comeback bid but also threw a pick-six and lost a fumble.

Jones went 20-for-30 for 261 yards and one touchdown with one interception as his team was plagued by poorly timed penalties and defensive breakdowns. The loss was the Patriots’ seventh in their last nine trips to Miami. When visiting South Florida in December or January, New England is 2-9 in the Bill Belichick era.

The Patriots, who clinched a playoff spot last week, will travel to either Buffalo or Cincinnati in the wild-card round, depending on the outcome of Sunday night’s Las Vegas Raiders-Los Angeles Chargers game. If the Raiders win, the Patriots would play the Bills. If the Chargers win or tie, the Patriots would face the Bengals.

Here are seven thoughts on Jones’ performance in Miami:

1. Jones’ first pass of the game was intercepted and returned for a touchdown.

Facing third-and-1 on New England’s opening possession, Jones tried to fit a short pass to his favorite target, Jakobi Meyers, but found cornerback Xavien Howard instead. It was Jones’ third pick-six of the season.

Jones either expected Meyers to continue moving toward the sideline or didn’t see Howard lurking outside. Or both. The rookie QB got a hand on Howard during his interception return but didn’t make much of an effort to bring the defender down.

The pick-six came just minutes after Miami opened the game with a 13-play, 77-yard touchdown drive. Miami added a field goal on its next drive — after a controversial unnecessary roughness penalty on a fake punt — to go up 17-0.

This was the same type of slow start that killed New England during its recent two-game losing streak. The Patriots trailed 20-0 to the Indianapolis Colts and 17-7 to the Buffalo Bills. In all three, they rallied late but could not close the gap.

Boosted by a sound blitz pickup by running back Damien Harris, Jones scrambled to his left and threw on the move to a wide-open Hunter Henry to pick up 35 yards.

Five plays later, Brandon Bolden followed a block from fullback Jakob Johnson and weaved through Miami’s defense for a 15-yard touchdown on third-and-1.

Outside of that one drive, the Patriots couldn’t get much going offensively in the first half. They totaled just three first downs over their other four first-half possession. Jones had two passes batted down and frequently was pressured by Miami’s blitz-heavy defense.

3. One of New England’s first-half possessions ended in a miscommunication. Jones’ pass on third-and-10 went to no one, with wideouts Nelson Agholor and Kendrick Bourne standing within a few feet of each other.

Bourne appeared to be the one at fault. After the play, Jones could be seen yelling “KB!” and pointing at his helmet. It seemed Jones audibled and Bourne did not pick up the check.

Bourne finished with 24 receiving yards, giving him exactly 800 for the season. That was enough to earn him a $250,000 incentive.

4. The Patriots got conservative at the end of the first half.

After a nifty catch-and-run by Bourne turned a third-and-18 into a fourth-and-inches at midfield, Bill Belichick kept his offense on the field, but only to try to draw the Dolphins offsides. They didn’t; Jones actually was called for a false start as the play clock wound down.

Multiple analytics models believed New England should have gone for it in that scenario.

Aggressive fourth-down decisions have not been common for this Patriots team. They entered Sunday ranked 29th in the NFL in fourth-down conversion attempts.

5. This certainly was not Jones’ cleanest outing, but he delivered a handful of very nice deep balls, two of which resulted in highlight-reel diving catches by Meyers and Henry.

Henry’s set up an 18-yard touchdown pass to Bolden that cut Miami’s lead to 27-17. One drive later, Jones hit a tightly covered Meyers for 39 yards down the left sideline. That hookup preceded a 1-yard scoring run by Damiein Harris that made it a three-point game with 2:53 remaining.

The Dolphins’ offense then burned all but three seconds off the clock on their ensuing possession. A desperation lateral play resulted in one final Miami touchdown.

Meyers and Henry — arguably Jones’ most trusted pass-catchers all season — accounted for 156 of the QB’s 261 passing yards in the loss.

6. Three plays after Meyers’ full-extension grab, Jones fumbled a snap from Ted Karras, and fellow rookie Jaelan Phillips dove on it for a turnover.

Karras, New England’s starting left guard, was in the game at center because starter David Andrews was dealing with an equipment issue, according to the CBS broadcast. Karras has extensive snapping experience — he was New England’s starter there in 2019 and Miami’s in 2020 — but has not worked much, if at all, with Jones in games this season.

The Patriots are 1-5 this season when Jones turns the ball over more than once and 9-2 when he does not.

7. The Patriots came into the game without some important pieces on defense (safety Kyle Dugger, linebacker Dont’a Hightower and slot corner Myles Bryant all were out) and wound up losing a key offensive player, as well.

Left tackle Isaiah Wynn exited with an ankle injury during the first half and later was ruled out. Justin Herron replaced him and played the rest of the game.

Wynn’s status now is a major concern as the Patriots head into the playoffs. Herron has starting experience (he started four games earlier this season) but has struggled, entering Sunday with a Pro Football Focus pass-blocking grade of 38.7 (out of 100).

If Wynn can’t go on wild-card weekend, would the Patriots consider moving Trent Brown to left tackle and inserting Onwenu on the right side?

Running back Rhamondre Stevenson also missed time with a head injury but later returned and gave the Patriots a spark, tallying consecutive carries of 7, 12 and 9 yards.

Standout rookie defensive tackle Christian Barmore was carted off late. He’d also be a significant loss if cannot return by next weekend. 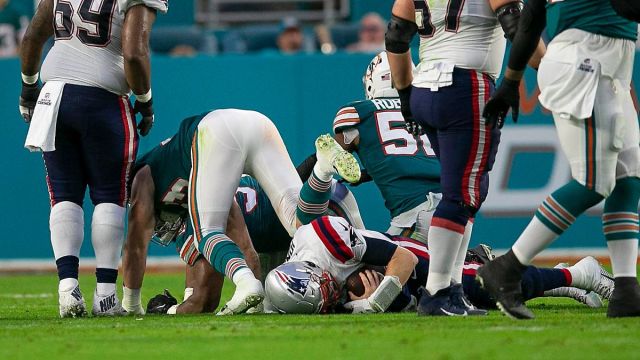 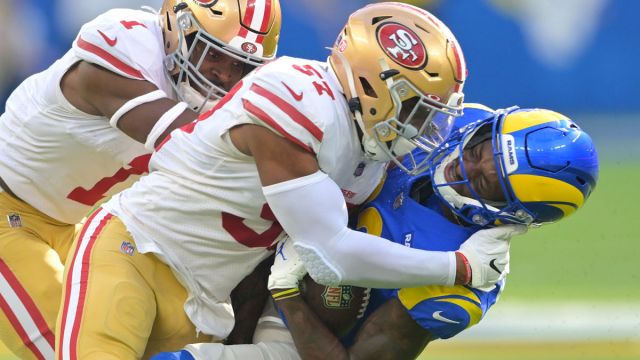