BOSTON — For the first time since 2015, Boston University is the Beanpot champion.

The Terriers claimed the title with a nail-biting 1-0 win over Northeastern, as the first goal — and eventual winner — wasn’t scored until there were less than three minutes remaining in the game. And while the Huskies saw their legendary three-tournament streak — which began in 2018, when they won their first title in 30 years — come to an end, this one was a long time coming for the Terriers, too.

Boston University had reached the final in six of the last seven tournaments, beginning with their last championship in 2015 — which came in overtime against Northeastern. In both 2018 and 2020, the Terriers fell to the Huskies in the championship. That 2020 loss especially was a heartbreaker, considering it came in double-overtime.

Of course, there is plenty of regular-season history between these teams, considering they are Hockey East rivals. Already this season, Northeastern defeated the Terriers (in overtime), then the teams skated to a 2-2 tie the next day.

“Really happy for our team, really happy for our seniors,” head coach Albie O’Connell said after the win. “We’ve got a few fifth years that stuck around to be in a game like this, and now that they’ve got an opportunity to win it, that’s amazing.”

Northeastern head coach Jerry Keefe was quick to give credit to the Terriers for a deserved victory.

“The better team tonight won,” Keefe said. “We didn’t deserve to win that game. I’m not sure why we didn’t play well, but we didn’t. When you don’t play well in big games, you usually don’t win them.”

Here are other notes from Monday’s Beanpot games:
— BU winger Dylan Peterson was named the Beanpot Most Valuable Player after scoring his game-winning goal, while Northeastern netminder TJ Semptimphelter was named the Eberly Award winner as the tournament’s best statistical goaltender, having stopped 69-of-71 shots across two games.

— The Terriers’ victory was even more impressive considering they were missing one of their top defenders in Alex Vlasic, who was out with an illness.

“Alex Vlasic’s one of our best players,” O’Connell said after the win. “I thought our D-core played well, and (goalie) Vinny Duplessis, he was the man tonight.”

— The Beanpot consolation game gave fans an opportunity to check out the tournament’s new overtime rules. Now, they’re not all that new to college hockey fans, considering the Beanpot simply adopted the NCAA rules which call for a five-minute overtime period followed by a shootout — rather than a five-minute overtime and endless 20-minute periods before a winner is crowned.

Harvard and Boston College elected not to go to a shootout, and things simply ended in a 3-3 tie.

While the title game ended in regulation, it was a doozy that had everyone at TD Garden readying for the championship debut of the overtime rules. And that one ending in a shootout certainly would have been an unceremonious ending regardless of what team came out on top.

— The Crimson never led in consolation play and at one point trailed 3-1, but they never lost hope. That much was evident as they battled through a full 65 minutes — with momentum clearly swinging in favor of Harvard late.

But that’s because they knew they could do it. The two sides already had met once this season, with Harvard battling back from a 3-2 deficit to score four goals in the third period and earn a 6-3 win.

“I think that gave us a little bit of confidence,” Harvard forward Jack Donato said after the game. “Obviously we don’t want to play from behind like that but having done it at Conte (Forum) a couple weeks ago, we felt like we were capable of it.”

Head coach Jerry York shared his thoughts on the streak while speaking to reporters after Monday’s game.

“The thing that has kept me going is just watching our players,” he said. “Their spirit is outstanding. They come to every practice with the intent that we’re going to get better. The locker room has not been affected by what the results are. That’s great to see. We’ve got great leadership.

“It’s gonna break, it’s gonna turn. That’s what our thought process is. Almost tonight. We couldn’t quite secure the victory. I told the guys a few weeks ago, it’s not my best team that I’ve had. But it’s certainly one of the most enjoyable teams I’ve had to work with, just because of their spirit, their ability to sustain their good hard work effort without positive results. So that’s a good sign from a coach’s perspective.”

— Now it’s on to the Hockey East and ECAC tournaments, where teams can earn an auto-bid to the NCAA tournament. But do any of them have hopes of being named an at-large competitor?

After Monday’s action, Boston University ranked No. 14 in the PairWise, which imitates the NCAA’s selection process for tournament competition. Northeastern was No. 17, Harvard was No. 23 and Boston College was No. 34. 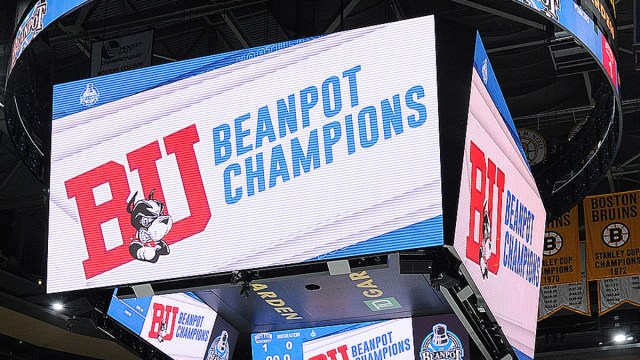 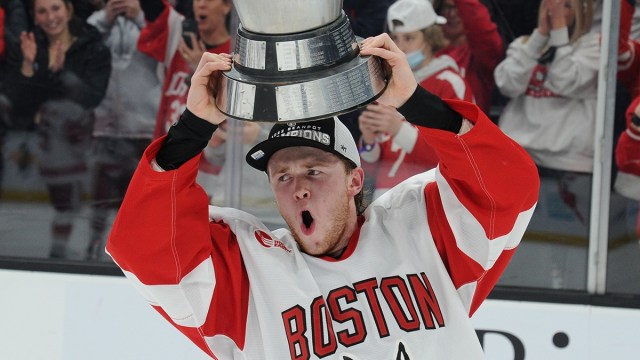