It took some extra time, but David Pastrnak logged the winning goal in overtime to send Boston past the Ottawa Senators, 3-2, on Saturday at Canadian Tire Centre.

ONE BIG TAKEAWAY
Well, it took a little longer this time, but the Bruins again saw their lead collapse.

Boston entered Saturday’s game off a pair of losses at the hands of the New York Rangers and New York Islanders. In both, Boston saw a lead evaporate before dropping the contest. In Ottawa, it looked as though the team already got that monkey off its back early, since a 1-0 lead quickly became a 1-1 game in the second period. When Brandon Carlo became an unlikely hero and scored a go-ahead goal late in the frame, it seemed like everything was all set.

A late goal from Nick Holden tied the game for the Senators, and so it was off to overtime.

While the Bruins came out on top of this one in the end and played a pretty even game, these late collapses are starting to become a dangerous trend.

STARS OF THE GAME
— Pastrnak chose a good time to break his scoreless streak, as he potted the overtime winner for Boston. He had not logged a point in four games.

— Carlo, who was questionable to play, ended up being the hero for Boston. The defenseman, who was cut by a skate at practice, scored at 18:54 of the second period to put the Bruins on top of Ottawa, 2-1.

It was his first goal in 20 games.

— DeBrusk also got on the board, opening the game’s scoring early in the second period. And he did so in impressive fashion, knocking the puck past Anton Forsberg in mid-air.

WAGER WATCH
The Bruins were favored in this matchup, listed as -185 on the moneyline at DraftKings Sportsbook. That means it would have taken a $185 bet to win $100.

There were plenty of ways for bettors to make money on DeBrusk’s opening goal, since he was pretty far down on the betting boards. The winger was +2200 to score the first goal of the game, meaning a $100 wager would return a healthy $2,200 payout. He was +340 as an anytime scorer.

UP NEXT ON NESN
The Bruins return home to host the Colorado Avalanche on Monday at 1 p.m. ET. The game, as well as an hour of pregame and postgame coverage, will air live on NESN. 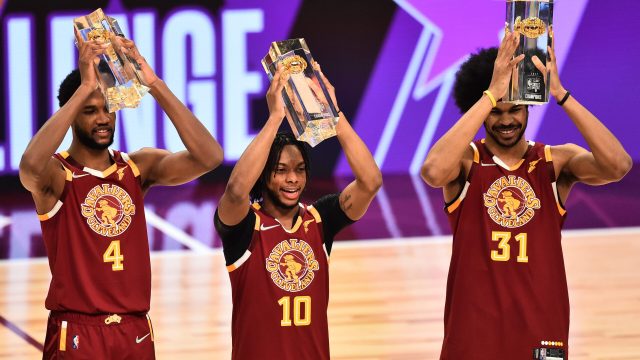