If and when the 2022 Major League Baseball season gets going, the Red Sox have at least one glaring roster hole that needs filling.

If Boston wants to build on an encouraging campaign, they’ll likely need to add an impact outfielder to round out its roster. Trading Hunter Renfroe to the Milwaukee Brewers is the impetus for that need, and making Jackie Bradley Jr. an everyday outfielder probably isn’t the best play given his offensive inconsistency.

The eventual end of the lockout — whenever that happens — should spur a rush of activity. The fascinating future of Japanese outfielder Seiya Suzuki tops the list of intrigue once business resumes. Boston unsurprisingly is among the teams tied to the free agent outfielder.

Just how much of an impact Suzuki can have is impossible to know. Japanese players have had varying levels of success upon joining the big leagues. But we do have projection models, and Dan Szymborski at Fangaphs used the ZiPS tool to project the first five seasons of Suzuki’s eventual big league career.

“Projected in a natural park, ZiPS has Suzuki as a better-than-league-average corner outfielder but one who projects below All-Star levels without another step forward.”

The entire story is worth a read, of course, if for no other reason than seeing the general projections that have Suzuki as a 20-home run, 2.5(ish)-WAR player.

What’s even more interesting about the Fangraphs exercise, though, is what Suzuki could mean to teams across the majors. With more ZiPS projections, Fangraphs found the Red Sox’s playoff probability would improve by nearly 10% with Suzuki on the roster in 2022. Only seven other teams saw a greater increase in the projections.

The Red Sox obviously have their own data and projections they can run. They, like the rest of the league, have likely kept a close eye on the outfielder in recent years.

It would also be fascinating to see if a team might try to change Suzuki’s approach at the plate. He’s currently more of a line-drive hitter and doesn’t strike out much, especially for someone who did hit 38 home runs last season. It might be tempting to have him power up even more, though that could come at the expense of his contact-heavy approach. Athletically, he’s impressive by all accounts, which is an important consideration for a team like the Red Sox who have plenty of space in parts of their home ballpark outfield.

The competition for Suzuki will be stiff, as it should be. Given where the Red Sox are at the moment, though, it would certainly make a lot of sense for Boston to push hard for the 27-year-old as he enters his prime. 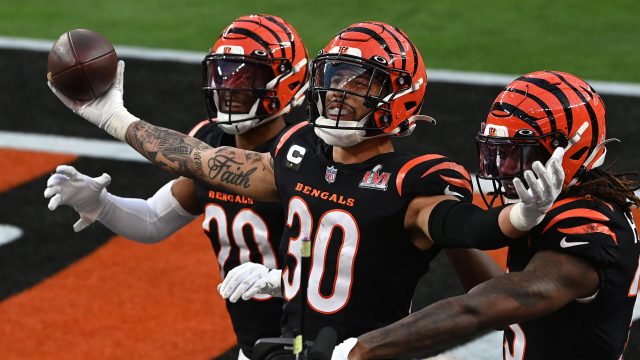 The Cincinnati Bengals are looking to extend Jessie Bates